ItAintEazyA2
A Bright Hope in Illinois


You'd think his name alone would keep him from winning: Barack Obama. Put an "Obama for Senate" bumper sticker on your car and the dyslexic or myopic might just try to punch you out.

Yet, three days ago, in its last preelection poll before Tuesday's primary for the open U.S. Senate seat in Illinois, the Chicago Tribune reported that Obama, a 42-year-old state senator, had opened a wide lead over the six other candidates vying for the Democratic nomination to succeed the departing Peter Fitzgerald. Obama was pulling down 33 percent support, while state Comptroller Daniel Hynes (an organization man) was second with 19 percent, and investment banker Blair Hull (who's spent at least $29 million of his own money on the race but whose campaign has been hurt by accounts of his very messy divorce) was in third with 16 percent.

Organization men are a staple of Illinois politics, of course, and investment bankers seem poised to take over the Senate in our plutocratic age. Obama, by contrast, is a candidate who all but defies categorization -- and who would certainly mark a radical departure for the stodgy Senate. If elected (and Illinois is a Democratic state becoming steadily more so), he would become the Senate's sole black member and just the third African American senator since Reconstruction, following Massachusetts Republican Edward Brooke and fellow Illinois Democrat Carol Moseley Braun, who only narrowly lost her seat to Republican Fitzgerald in 1998 despite a string of scandals.

But that scarcely begins to describe the distinctiveness of Obama. His father was Kenyan, his mother a white girl from Kansas. The two met and married at the University of Hawaii in 1960 (when miscegenation was still a felony in more than half the states). His father disappeared from his life when Obama was 2; his mother raised him in Hawaii and Indonesia. Obama went to college at Columbia, then moved to Chicago for five years of community organizing in a fusion of civil rights crusading and Saul Alinsky house-to-house plodding. He then went to Harvard Law School, where he became the first black president of the Law Review; returned to Chicago to run a program that registered 100,000 voters in the '92 elections, entered a civil rights law firm and became a senior lecturer in constitutional law at the University of Chicago. (If elected, Obama would be the second liberal Hyde Park academic to represent Illinois in the Senate; New Deal economist Paul Douglas was the first.)

Seven years ago Obama was elected to the state Senate from a district in Chicago's South Side. In Springfield, he developed a reputation as an impassioned progressive who was able to get support on both sides of the aisle. One of his bills created a state earned-income tax credit that has brought more than $100 million to Illinois's working-poor families. Another, conceived in the wake of revelations about innocent men the state had wrongly executed, mandated the videotaping of police interrogations of suspects in capital crimes. There followed "tortuous negotiations with state's attorneys and death-penalty abolitionists," Obama recalls, but in the end the bill passed unanimously.

In October 2002, Obama made an eloquent case against the impending war in Iraq at a rally in downtown Chicago. Declaring repeatedly that "I don't oppose all wars," he distinguished what he termed "a dumb war, a rash war" from a string of just and necessary wars in which the United States had engaged. He is surely the progressives' darling in the field, drawing enthusiastic support from white Lake Shore liberals as well as the African American community. But he's also won the endorsements of virtually all the state's major papers, many of which -- such as Chicago's Tribune and Sun-Times -- note their disagreement with him on the war but hail him as a brilliant public servant nonetheless. Should Obama win, says Rep. Jan Schakowsky of Evanston, who backs his candidacy, he'd "march right onto the national stage and the international stage."

While practicing law in the early 1990s, Obama wrote "Dreams From My Father," a memoir and meditation of genuine literary merit that depicts his understandable quest for his identity -- a quest that immersed him in the world of Chicago's poor and that took him to a Kenyan village in search of a father he never knew. It's a story of worlds colliding, fusing and redividing, of a life devoted to re-creating in a grittier world the idealism and sense of community of the early civil rights movement, which provided the backdrop for his parents' marriage.

If by "American" we mean that which is most distinctive about us and our ideals, if we mean it to refer to our status as a nation of immigrants that could yet become the world's first great polyglot, miscegenistic meritocracy, then Barack Obama, if elected, would not only become the sole African American in the Senate: He would also be the most distinctly American of its members.
3/12/044:21 PM
❤️ 0
Original Post 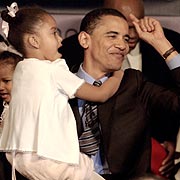 Today, three days after his landslide victory in that crowded field, the self-described "skinny guy with the funny name" is the odds-on favorite to win in November and become the only African-American in the Senate and only the third black senator since Reconstruction.

Partisans in Washington consider him a shooting star in the November elections. A few whisper about a presidential future. "He's the real deal," says Sen. Jon Corzine, D-N.J., chairman of the Democratic Senatorial Campaign Committee.

Obama, 42, is wary of the hype: "I'm trying avoid reading my own press clippings," he said Thursday in a phone interview. "We made a terrific step up on Tuesday, but we've got a lot of work to do."

Illinois, which leans Democratic in federal elections, could be pivotal. Republicans control the Senate 51-48, with one independent who often votes with the Democrats.

"It's a race of tremendous national significance, and it has to do with more than national positioning," Corzine says. "We need to make sure that the Senate looks like the rest of America."
The Obama file

CAREER: Civil rights attorney with the firm Miner, Barnhill and Galland; lecturer on civil rights law, University of Chicago; chaired the Chicago Annenberg Challenge, a $50 million philanthropic effort to reform the city's public schools; community organizer in Harlem and Chicago, 1983-88. His memoir, Dreams From My Father, was published by Random House in August 1995.

TIDBIT: Claims not to have eaten ice cream since working at a Baskin-Robbins as a teenager.

The last black person to serve in the Senate was from Illinois, Carol Moseley Braun, from 1992 to 1998. She was defeated by Peter Fitzgerald, a Republican, who is not seeking re-election. The other black senator was Edward Brooke of Massachusetts, who was elected in 1966 and served two terms.

Obama wants to broaden his appeal beyond the color of his skin. "I'm rooted in the African-American community," he says, "but not limited by that."

His father, a Kenyan economist, was "black as pitch," Obama wrote in a 1995 memoir. His mother "” "white as milk," he wrote "” was from Kansas. His father left the family when Obama was 2. He was reared by his mother and grandparents in Hawaii and Indonesia. He graduated from Columbia University and Harvard Law School, where he was the first African-American president of the law review.

He's even turned his name (pronounced bah-ROCK oh-BAH-ma) into a way to connect with voters. He jokes that he has been called "Alabama" and "Yo' Mama."

Schakowsky recalls Obama's appearance at a Jewish retirement home in her district. He explained to the crowd that his first name, Barack, is Swahili for "blessed by God" and is a linguistic relative of baruch, which is Hebrew for blessed.

"He exudes this calm kind of integrity," she says.

Obama is a jazz enthusiast who has criticized rap music because of violence and disrespect for women. He has admitted experimenting with marijuana and cocaine as a young man. He wrote about it in his memoir and framed it as a cautionary tale for young black men.

In his six years as a state senator, Obama has focused on health care, education, death penalty reform and poverty. He spoke out against the war in Iraq before it began.

He says wants to model himself after Illinois Sen. Paul Simon, who died last year.

Simon's daughter, Sheila Simon, endorsed Obama in TV ads in the closing weeks of the campaign. "Dad really liked him a whole bunch," she says. "He's done it without money or party. He's not just buying his way in."

On election night, Sheila Simon gave Obama one of her father's trademark bow ties. He says he'll carry in his suit pocket as he campaigns, "to remind me of the tradition I'm trying to uphold."
3/21/0412:24 PM
❤️ 0

FaheemA1
Imagine if he was a Republican, those republican rascals would be selling him as the son of an immigrant who was able to maneuver through the racism of the 60's and 70's and get through college and become the first Black president of the Harvard Law review and living proof that racism is not a problem in America.

This is also demonstrative of how republicans use race but yet claim to not be racist. I hope this brother win, to prove to the Negro men and women who are cooning for the republicans that you do not have to sell your soul to be successful.
3/21/042:18 PM
❤️ 0
Back To Top