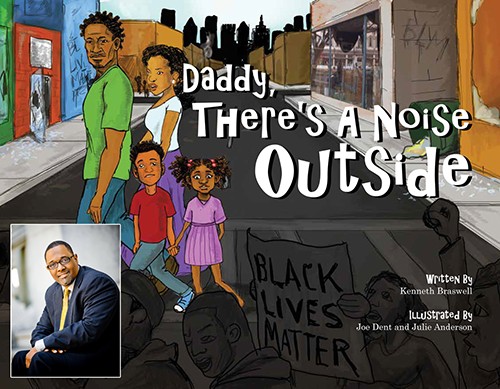 Atlanta, GA — Executive Director of Fathers Incorporated; Kenneth Braswell is no stranger to finding ways to help his community address sensitive subjects. His professional career is currently grounded in running his 11 year old not-for-profit in an effort to build the capacity of fathers to be build stronger families. Fast-forward thousands of articles, three books and two documentaries later, Braswell has turned his attention to children’s literature.

Braswell’s newest venture Daddy, There’s a Noise Outside, takes the complex issue of protesting and breaks the conversation down so that a 1st grader can understand. “The idea came when my 6-year-old son asked my wife why was I in Baltimore on the day that the indictments were issued on the six police in the Freddie Gray case,” says Braswell. “To which she said to him; Wait till your father comes home, and ask him.” That explanation transformed into a 24-page children’s book focused on helping 1st-3rd graders understand the nuances of protest.

The story begins when two children are awakened by noises in the middle of the night outside the window of their inner-city neighborhood. Both their Dad and Mom spend the next morning explaining to them what was taking place in their community.

A recent article by Daniel JosÉ Older of The Guardian speaks to the low percentages of children’s books written depicting African American characters. The article entitled, “Do black children’s lives matter if nobody writes about them”, states that in 2014, only 5% of the 3,500 children’s books published were about black characters. “There is a huge opportunity for Black authors to use children literature to education them on current societal issues,” says Braswell. The book is illustrated by up Atlanta resident Joe Dent and New York artist Julie Anderson.

What Others Are Saying About the Book:

“Enter Mr. Braswell. In a simple, lively, positive and well-illustrated narrative, his Daddy There’s A Noise Outside, enables parents initiate conversations with their children and grandchildren about the protest movements of today. In the end, this will help their children decipher their roles and build upon the legacy of their predecessors. The struggle continues and ‘Daddy There’s A Noise Outside’ can be a big part of it for your children and grandchildren.” — Dr. Ronald C. Mincy; Professor; Columbia University

“‘Daddy There’s A Noise Outside’ is a simple and eloquently written book which signifies today’s times within our communities. Kenneth has captured the natural curiosity of children, and meshed it with the responsibility of parenthood in a profound way. — Omar Epps, actor

“I love what Kenneth Braswell did with this book. It reminds me of the household I grew up in. My father was a union delegate and community activist who always exposed us to the plight of others that were in some sort of struggle, be it political, religious, racial or economic and preached to us about our role in making a positive difference. ‘Daddy There’s A Noise Outside’ is a perfect starter kit for parents who want to plant those activist seeds in their children.” — Malik Yoba, actor

The full release launch of the book will kick-off at a book signing on MLK Day (January 18th – 1-3pm) in Atlanta at The Center for Working Families. The book is available for presell through the 15th atwww.fathersincorporated.com/dtano.html in order for books to arrive by Christmas.

About Fathers Incorporated
Fathers Incorporated is a 501(c)3 not-for-profit (S) corporation and is dedicated to strengthening the community and family infrastructure by encouraging and enabling the positive involvement of fathers in the lives of their children.