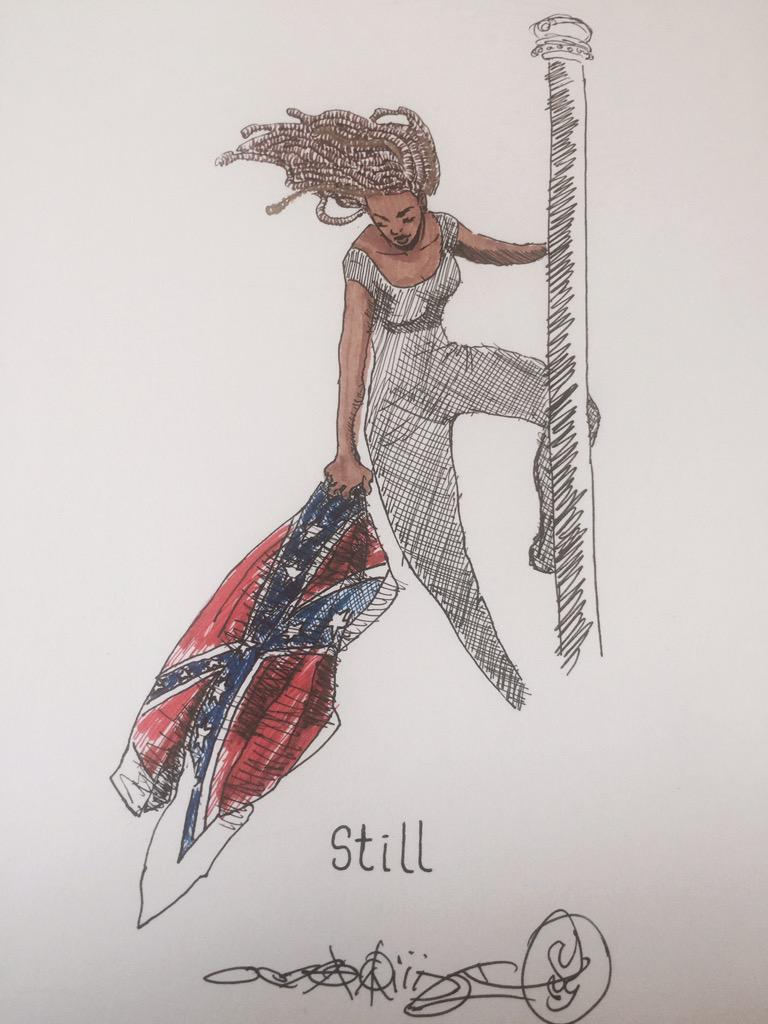 as stated in another thread, without the white guy with her, she probably would have been shot.

If it was a Black guy, he would have DEFINITIVELY BEEN SHOT....THIS IS SOUTH CAROLINA...REMEMBER??

Exhibit A, in the Great State of South Carolina..  (from 2014)  https://www.youtube.com/watch?v=-XFYTtgZAlE

Exhibit B, in the Great State of South Carolina..  (from 2015)  https://www.youtube.com/watch?v=ym4tE0SQCZY

Now that EVERYBODY has the right to marry and use each other as human trampolines; more bounce for the ounce, maybe we can get some laws in place that makes it against the law to pump our behinds with bullets.

Dogs can't be mistreated without folks getting their asses in a bunch. Maybe some laws can be enforced that can make "people" feel the same sadness about the extra holes blasted in our butts by Klan Kops and Self-hating Brothers.

as stated in another thread, without the white guy with her, she probably would have been shot.

If it was a Black guy, he would have DEFINITIVELY BEEN SHOT....THIS IS SOUTH CAROLINA...REMEMBER??

Exhibit A, in the Great State of South Carolina..  (from 2014)  https://www.youtube.com/watch?v=-XFYTtgZAlE

Exhibit B, in the Great State of South Carolina..  (from 2015)  https://www.youtube.com/watch?v=ym4tE0SQCZY

I fully understand and I agree; but, still, the Black Woman had take it upon herself to do this too.  Took it upon herself, bore the burden, did it all by herself, took the initiative, did what was necessary and the right thing to do, with or without the Black Man.

They didn't have to arrest Bree. They could have let her go. They hoisted the sucker back up anyway, didn't they?? They should put a picture of Honey Boo-Boo's mother's picture on the flag. Make it really look like a legitimate Portrait of the South. All that Southern Caucasoid Beauty!!!!!!!!!!!!!!!

Everybody has to stand up.

whether off a little or off a lot.

We got to stand following the example of POTUS Obama in Charlotte. Even the most well thought out campaign, with its stripes of true and false, shows its value and its strength through spiritual power as connected to the political scene. (Please see videos of Pastor and Senator Clementa Pinckney a/k/a Benevolent and Brave African Spiritual Leader. He professionally straddled state and then church. It was all ONE THING, as he said.   The estimable Senator  worked at it with dignity, humanity and a full-throated presence. )

This is a time that can be used. Obama’s lightning moment arrived! Let’s not indulge in bicker.We have the narrative and must WORK IT. WORK AT EVERYTHING. NOW.

Seize the moment.Take the wheel.

I think what she did was great and sets a good example but to be honest most people are not socially aware and give little thought outside their bubble. Perhaps her actions will oblige more people to take interest in what's going on.

But that flag may not officially come down. If blacks in Charleston South Carolina really wanted that flag down they could have done it with their votes a long time ago. It seems with so much time gone by, they have accepted that flag. And then the circumstances that flag was put up in 1962 was all about maintaining racism and segregation. Yet blacks who make up a significant percentage in Charleston did not have the political will to remove it.

If what she did leads to political action to remove that flag then its great but if that flag remains it would be even more an insult for what it stands for.

"If blacks in Charleston South Carolina really wanted that flag down they could have done it with their votes a long time ago."

Queen Bree in a short film ...

I fully understand and I agree; but, still, the Black Womanhad take it upon herself to do this too.  Took it upon herself, bore the burden, did it all by herself, took the initiative, did what was necessary and the right thing to do, with or without the Black Man.

Sho' you right my sista!

Another example of this kinda thang happened last week when i dropped my car off for repairs and took the bus home so I can do some much needed reading.  There were about 10 young middle schools sitting in the back making all kind of inappropriate noises and harassing other patrons.

A brotha shouted to them to behave and they did for a while until he got off.  They resume their shenagenian[sp] and so I was just getting ready to say something to them but before I could two rival gangs boarded the bus.   And it was on and cracking.  The boys in the back asked the guys where they were from.  I couldn't believe that they still ask that question.  But the boys didn't say anything.  I started to tell them to say they come from Africa.  But didn't.  Long story short.  It got heated and out of nowhere there was a rumble right in front of me...on the bus while the bus was making a left turn in the middle of heavy traffic.  It was at least 12 kids fighting on the floor of the bus.  Who was there to mitigate the situation?  Black Women!  There were no men on board who could or wanted to handle this rowdy group.  So of course black women stepped in-attempting to block the violence.  Unfortunately one woman was hurt.  Where were the men?   Thank God no one had guns or it really would have been a 6 O'clock news tragedy.  Paramedics came and eventually the po po.  And by the way....not one WHITE or HISPANIC on board helped to remove the children off the bus.  They just looked frozen scared. Black women had to do it...without FEAR!!!

The next day, I called the school in the area and reported the hoodlums,  And lemme say this.  As I was talking to the person in charge at the time...he said "these fools need to be off the streets and put under the jail."  I said to him, "they're children."  He said "I don't care they need to be taught a lesson."  I said "the lesson is being taught....by this gang mentality that is a popular trend."

He went on to say other things...and I told him no wonder these boys act like wild animals....look who's modeling for them?  Before we could get into a heated debate cuz it was acoming cuz I started saying some raw thangs [he was pissing me off], I quickly hung up so I could call the bus security to make sure that they send the school the recorded tape.  My point?  We as a people need to be unified in all areas that affect our culture.  Cuz these boys did NOT respect women as the guy on the phone did NOT respect me as a caller to report ruckus behavior from his students.  So we must begin to find a way where we can communicate with each other to save our children.  Otherwise, there will be no more black folks left, they will all be in jail or dead.  When I told him that?  He said oh no....it will be enough of us as  if what I was saying had no merit.   So it shouldn't just be us women falling on the blade for our people....it should be ALL OF US.

Cuz why?  We still have some GROWN fools out there in authority over children...who DON'T have a clue or a LEVEL HEAD as to how to handle troubled youth and HOW to mitigate the situation to turn that bad behavior into a productive learning outcome.  It is soooooooo sad that we are here now.

A painting of this American hero and fighter of domestic-terrorism

should hang in the lobby of the State building!