It's really getting HOT out there with this approaching election.  It is said in the media that Trump is responsible for the FBI re-investigating emails.   I don't know what that means.  And now countries from all over the world are sending delegates to monitor the election for fear of it being rigged.  That?  Has never happened before aside from what occurred in Florida during the Bush, Jr. election.

So.  Where are we now as a country?  Divided to say the least.  All social media are on full drive debating what will happen if either candidate wins.  In all my years voting, I have NEVER in my life experience such a crisis in our election process.  Even George Duke didn't promote such anger back in the sixties when he ran.  And now that other countries are getting involved?  I just wanna throw up cuz quite frankly?  It's none of their business....but!  I hear em.  America has stuck its NOSE in their business for too long....now it doesn't feel good when they do it.  We all have something to lose either way.  Clinton if she wins will be the FIRST "woman" president of one of the most powerful nation on the planet.  Trump if he wins will be responsible for setting the country back 500 years.  Maybe the President of the Philippines know something we don't as why he is requesting that American Troops leave his country in the next two  years.

But!  Here's the thing.  We have MORE people on the side of GOOD than we do on the side of BAD.  And they are willing to come forward cuz they KNOW what is at stake.  And they are willing to die for it.  What is it they are so willing to die for?  FREEDOM.  We lost what it means through the years.....but!  All you have to do is look at the struggle in other countries with the people who are DENIED it by their government.  It's a revolution again.  Black Power, White Power, Women Power....are all struggling to have a VOICE in America.  I haven't heard a WORD for immigrants who are sitting silently back to see what is gonna happen.  Yes it's kinda scary.  But anything that is worth it....is worth being a little frighten.  That scary feeling is the courage to forge ahead.  Otherwise what our ancestors built and fought for will be ALL in vain.  We have to stand in our truth?  More than ever.  Are you with me?

Clinton is dirty...Trump is the Devil..... your choice

This is about mishandling emails by her aide, Huma. There is no illegal or criminal activity on HRC's part. Nothing. She bumbles and fumbles but the GOP are playing this propaganda card to the hilt  There's no crime but they seek to trip her up on inconsistencies.

This is about mishandling emails by her aide, Huma. There is no illegal or criminal activity on HRC's part. Nothing. She bumbles and fumbles but the GOP are playing this propaganda card to the hilt  There's no crime but they seek to trip her up on inconsistencies.

That's all it is.

In 2012, the attorney general’s office, then led by Eric Holder, sent a department-wide memo that included guidance on making announcements so close to an election.

The memo cautions that employees of the DOJ “must be particularly sensitive to safeguarding the Department’s reputation for fairness, neutrality, and nonpartisanship.”

“Simply put, politics must play no role in the decisions of federal investigators or prosecutors regarding any investigations or criminal charges,” it reads. “Law enforcement officers and prosecutors may never select the timing of investigative steps or criminal charges for the purpose of affecting any election, or for the purpose of giving an advantage or disadvantage to any candidate or political party.”

Comey defended his decision to disclose the latest developments in the investigation in an email he sent to FBI staffers Friday, shortly after sending his letter to eight Republican House and Senate committee chairs.

“Of course, we don’t ordinarily tell Congress about ongoing investigations, but here I feel an obligation to do so given that I testified repeatedly in recent months that our investigation was completed,” he said, referring to the times he has appeared before congressional committees since July. “I also think it would be misleading to the American people were we not to supplement the record.”

The FBI chief said he did not “want to create a misleading impression,” but he acknowledged the “risk” in notifying Congress.

“In trying to strike that balance, in a brief letter and in the middle of an election season, there is significant risk of being misunderstood,” Comey wrote, “but I wanted you to hear directly from me about it.”

CBS News confirmed that the new emails were found on the electronic devices of top Clinton aide Huma Abedin and her husband, former Congressman Anthony Weiner, from an FBI investigation into Weiner’s latest sexting scandal. Abedin and Weiner announced their separation earlier this year.

Following the letter, Comey received plaudits from Republicans over taking further “investigative steps” in the Clinton email case Friday, just as Democrats -- including the Clinton campaign -- called for the immediate release of more information.

Lynch, for her part, is no stranger to Republican criticism over the email investigation. Just as the FBI was wrapping up the case this summer, Lynch had an impromptu meeting with former President Bill Clinton on the tarmac of an Arizona airport.

At the time, Lynch had said the appearance of impropriety was enough to make her regret the chance meeting.

“The most important thing for me as the attorney general is the integrity of this Department of Justice,” the attorney general said in July. “And the fact that the meeting that I had is now casting a shadow over how people are gonna view that work is something I take deeply, and seriously, and painfully.”

Is she HIS boss? Doesn't he has to GO through her FIRST?

Somethin sounds mighty fishy.  I think Clinton was set up.  Cowey SHOULD be fired.  But!

James Comey is a republican.

He may be a republican but Lynch IS his boss and if a black person did that? And Attorney General was WHITE.  Heads would roll.  Plus he isn't supposed to take PART of any political propaganda.  His being republican is a private issue.  Doesn't have ANY thing to do with his job.  It's called a CONFLICT of interest because it was DONE in malaise.  So.  That's why I said he should be FIRED.  Cuz he is supposed to pass that by his "boss" first.  And is totally a form of  disrespect of protocol and  insubordination.   So it will be interesting WHAT she will do and HOW she gon handle him.  And I know he's thinking in a minute she won't be attorney general if Trump wins...but!  Doing that?  Wasn't his call to do.

He may be a republican but Lynch IS his boss and if a black person did that? And Attorney General was WHITE.  Heads would roll.  Plus he isn't supposed to take PART of any political propaganda.  His being republican is a private issue.  Doesn't have ANY thing to do with his job.  It's called a CONFLICT of interest because it was DONE in malaise.  So.  That's why I said he should be FIRED.  Cuz he is supposed to pass that by his "boss" first.  And is totally form of a disrespect of protocol and  insubordination.   So it will be interesting WHAT she will do and HOW she gon handle him.  And I know he's thinking in a minute she won't be attorney general if Trump wins...but!  Doing that?  Wasn't his call to do.

It is supposed to be that way, but that's is the cause of nearly all the problems in this country, people who can't [or refuse to] be professional enough to keep their personal opinions and 'belief' separate from the jobs they have where they have SWORN AND OATH to do just that.

But, what he did certainly let's you know that Lynch is just a 'token'  put in place to give the appearance of non-bias, so all the LYNCHINGS of Black people in America will either go unchallenged or be assumed "justifiable".

Bingo!  Hate to say it but YOU'RE RIGHT!!!  Token.  Probably why Holden resigned.  Couldn't be the spook.  Now I understand.

A black woman with the last name "Lynch." Bullets aimed at the chests of our sons, daughters and in some cases, grandparents. This woman shows no expressions whatsoever, plus she's no taller than a kite, like Hillary. I can't grasp what's happening in THIS country at the moment. Everyone's suspect. Everyone. I am people traumatized, big time. Don't give a damn what "race" one is at the moment.

I'm right there witcha my sista.  The media has done an excellent job in confusing the issue-both parties are guilty of.  There is no integrity or dignity.  Both are swinging at each other with the vileness that is not befitting of an election process.  I project this will be standard from now on.  Instead of telling policies...it will be telling and digging up dirt.  This is what America has become.  Sad.  But!  I just don't know if I can VOTE for a man who disrespects black people AND women....which I am both.  I was weary of Clinton in the beginning however she is in fact the lesser of two evils...I keep saying.  But every thing is getting foggy.  Will this be the flavor of the white house....not telling the people the real truth.  It's a total disrespect to the citizens....and the world is just as much on edge as we are.  We will definitely know where we are headed as a FREE county by next Tuesday.  But!

Two semi-melted Snow Balls, reaching for the reigns of power over the Natives' stolen lands; one vying to "make America White again"; the other, all day, everyday, 1 million emails. Whatever "brain power" these Neanderthals had, or thought they had, must have lost it during some kind of sexual trysts. 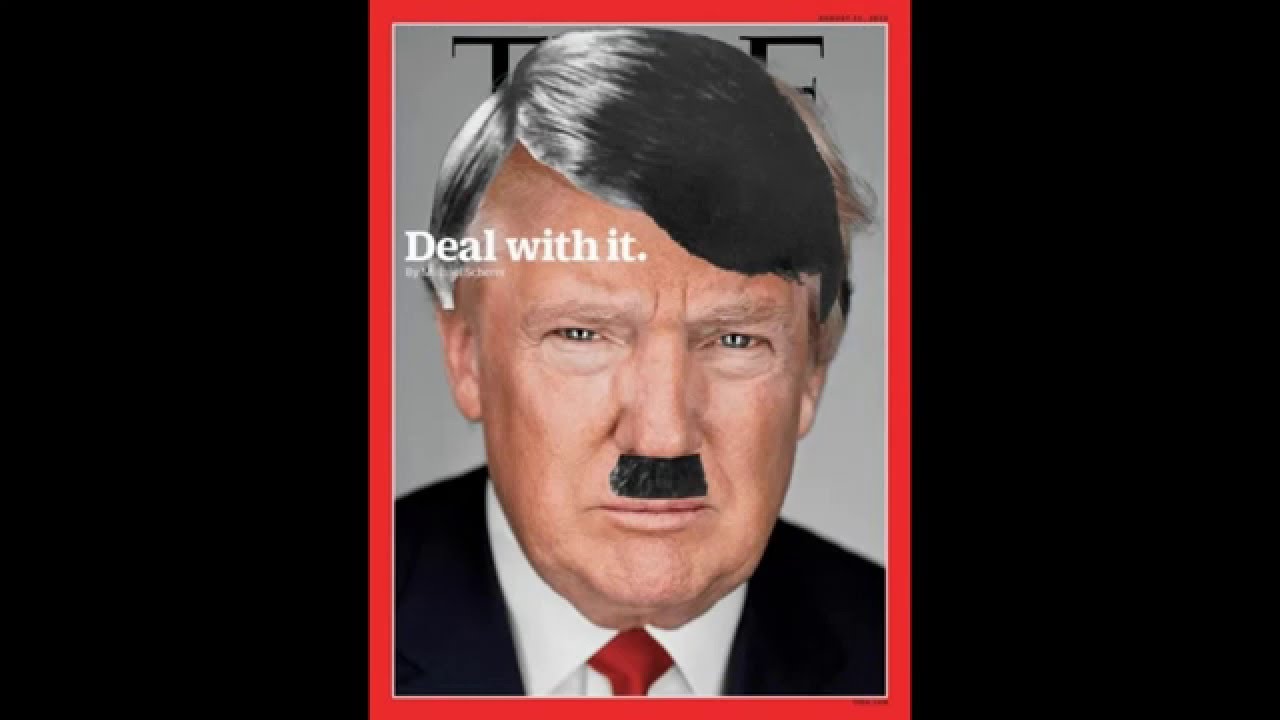