2 men to be sentenced for UK black teen's murder 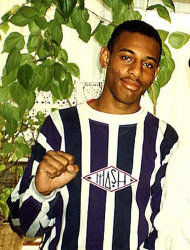 LONDON (AP) — Two men are to be sentenced Wednesday for the murder of black teenager Stephen Lawrence in a case that has taken Britain nearly two decades to bring anyone to justice.

Gary Dobson, 36, and David Norris, 35, were 17 and 16 at the time of the 1993 stabbing. Sentencing guidelines for offenders under 18 were less severe then, so they each are expected to receive a sentence of at least 12 years.

Had they committed the crime in the last year, Dobson and Norris would face minimum terms of 25 years for a racially aggravated knife murder, the same as an adult sentence.

The judge does have some discretion to set a longer sentence, taking into account that the attack was racially motivated and that one of the gang involved in the killing carried a knife.

The investigation — which has seen multiple court appearances by suspects over the years but no convictions until Tuesday — led to strong criticism of London's Metropolitan Police and resulted in an investigation that found the force was "institutionally racist" and had bungled evidence-gathering.

It also led to a change in Britain's double jeopardy rules, permitting a second prosecution if compelling new evidence emerges.

The jury at the Lawrence trial were not told that Dobson already is in jail for a drug conviction. Norris has been in and out of prison for other convictions. In 2002, he was jailed after shouting a racist insult at a police officer and later jailed again for stealing a car.

Both men's lawyers argued during the trial that the strain of being accused of Lawrence's murder has already affected their lives.

Defense lawyer Stephen Moses said Dobson had no previous conviction for violence at the time of the attack and came from a loving family. Fellow defense attorney Stephen Batten said Norris's marriage had broken up under the strain of the long investigation.

Men get 14 and 15 years for UK black teen's murder

LONDON (AP) — A British judge has sentenced two men to minimum prison terms of 14 years and 3 months and 15 years and 2 months for stabbing a black London teenager to death almost two decades ago.

The murder of 18-year-old Stephen Lawrence shocked the country and came to be seen as a festering racial injustice. It took 19 years before anyone was convicted, and three other suspects remain at large.

Gary Dobson and David Norris were convicted Tuesday. On Wednesday, Dobson received the 15 years and 2 months sentence. Norris was jailed for 14 years and 3 months.

Because Dobson and Norris were teenagers at the time, their minimum sentences were shorter than if they had been adults.

20 freakin' years for a conviction??

EbonyRose, at least they got a conviction. The FBI is still conducting investigations from crimes committed, actually terrorist acts, against black people from the 1960's. If caught and convicted those criminals received less than these two got. Most of the offenders are now dead. This young man and his family received some justice while they were still living. Also, I'm glad that the mother refuses to forgive these white bastards. They don't deserve it. And the police should be charged with obstruction of justice.

I started to post this story last night, but I got distracted with something else.  It is an insult for them to only get 14 and 15 years for murder.  I hope that the parents are now ready to sue the Police covering up this crime, I mean, obstruction of justice.  Now this is what Black people, African Americans should be watching closely "It also led to a change in Britain's double jeopardy rules, permitting a second prosecution if compelling new evidence emerges", because, you probably see Americans/prosecutors calling for the same change in this country so that they will have even more ammunition to wage at incarcerating more Black people and minorities in America.

But then I got to thinking about the travesty of it .... and just got

You know .... I have heard people say that the racism in Europe "isn't as bad" as it is here.  But, I think those people fail to realize that that's because they sweep the whole issue of race under the rug .... and don't acknowledge how EXTREME the discrimination STILL is over there.

They are actually waaaaayyyyy behind us in terms of "race relations."  In fact, most countries still are.

Now how sad is that??