“The stand your ground and open carry laws are a return to the days when white supremacy was openly expressed through conquest of the native population, slavery, and lynch law terror.” 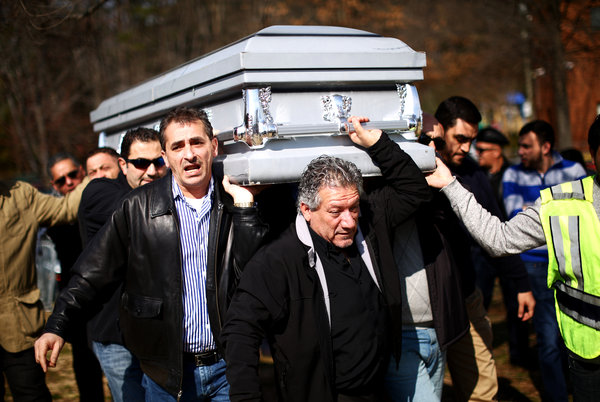 The coffin of one of three young Muslims who were shot in Chapel Hill, N.C., this week was carried to a funeral prayer service on Thursday in Raleigh, N.C.CreditTravis Dove for The New York Times

Craig Hicks was a human time bomb in his Chapel Hill, North Carolina neighborhood. He was constantly spoiling for a fight, about noise or parking or anything else that he found irritating. Hicks was always armed, a resident of an “open carry” state which allowed him to wear a holstered gun anywhere at any time. On February 10, 2015, Hicks turned himself in to the police and confessed to murdering three people that day.

The victims were identified as Deah Shaddy Barakat, his wife Yusor Abu-Salha, and her sister Razan Abu-Salha. Hicks had argued with the family about parking spaces but it seems any reason to pull the trigger would have been good enough.

Hicks motive for the killing is murky. Some of his political views could be called liberal and others conservative. But more than anything Hicks was serious about being a white man. He loved his guns and he asserted his right to be armed at all times. It is likely that he had mental health issues, but the sickness did not emerge solely from this particular individual.

Where Hicks fell on the political spectrum is really beside the point. He expressed support for the right to bear arms, marriage equality and abortion rights but more than anything he supported his right to be violent. Because of their passivity everyone around him did as well.

His neighbors are now telling the media about his constant arguments and confrontations while being armed but there are no reports of anyone ever calling the police about his behavior. The Barakats told relatives they feared Hicks but ultimately decided not to call the police either. Hicks’ neighbors discussed their concerns among themselves but took no other action. The complicity led to unintentional enabling and that made the killings inevitable.

“Open carry laws are obviously reserved for white people only.”

The inaction stands in stark contrast to the treatment meted out to black people who are at risk of being killed even when they don’t threaten anyone. North Carolina allows open carry of firearms but so does the state of Ohio. That fact didn’t keep John Crawford or Tamir Rice from being shot down in Dayton and Cleveland respectively. They had toy guns and weren’t a danger to anyone. Yet both of them are now on the long list of black people killed by the police. Open carry laws are obviously reserved for white people only.

It is important to ask if the Hicks murders were a hate crime but there are questions which must be explored and they may be harder to deal with than legal definitions. The most fundamental questions is this. Why are white people seen as benign and their behavior as normative, no matter what they do?

Try to imagine a black man picking fights with his neighbors while armed. Then try to imagine that no one ever calls the police in this hypothetical scenario. In Tampa, Florida a black man named Clarence Daniels was legally carrying a gun when he walked into a Walmart. A white man took it upon himself to confront and assault Daniels. The white assailant was arrested but as a black man Daniels was lucky not to have ended up dead.

Hicks got the kid glove treatment despite the obvious risk he posed to other people. Fealty to whiteness trumps all else including the desire for safety. In 2014 a Nevada rancher named Cliven Bundy sparked a white power movement which threatened the lives of federal marshals. Bundy owed the government thousands of dollars in payment for his cattle grazing on federal land. He didn’t just refuse to pay. He gathered a group of armed followers. Two of them, Jerad and Amanda Miller, went on to kill two police officers.

“Fealty to whiteness trumps all else including the desire for safety.”

At least one person knew that the Millers were armed and dangerous. She saw their arsenal of weapons and heard them say they were going to start a revolution. “I should have called the cops,” was the lame admission. That much is obvious but the expression of regret doesn’t explain very much.

The stand your ground and open carry laws are a return to the days when white supremacy was openly expressed through conquest of the native population, slavery, and lynch law terror. Those acts should not be seen as events of long ago history. They became part of this country’s DNA and give angry, unstable white people a pass to do what they want. They aren’t thought of as potential killers or terrorists as they should be. Bystanders aren’t sufficiently concerned because they too give white people the benefit of the doubt even when they don’t deserve it.

Hicks strongly believed in the right to bear arms and had four handguns, two shotguns and six rifles in his home at the time of the killings. No one knows what twisted thoughts finally sparked the violence but the sickness of this country’s history helped him to carry it out. There are thousands of dangerous people like him who call themselves patriots or sovereign citizens or doomsday preppers. But mostly they just believe in being white.

Margaret Kimberley's Freedom Rider column appears weekly in BAR, and is widely reprinted elsewhere. She maintains a frequently updated blog as well as at http://freedomrider.blogspot.com. Ms. Kimberley lives in New York City, and can be reached via e-Mail at Margaret.Kimberley(at)BlackAgendaReport.com.

This was a stupid and pathetic race baiting article. No evidence that I know of has proven without a shadow of doubt this man was racist. I'm not supporting him  because I hope he gets the death penalty for these senseless murders. But this weak attempt to stoke the fires of race paranoia is unnecessary and self serving...

We've seen this perp before!

NSpiritA1
I knew Xeon, Cracker by Proxy, would be in here with a heartfelt impassioned defense of a white killer before I even clicked on it.  How predictable!
3/1/156:23 AM
❤️ 0

"I knew Xeon, Cracker by Proxy, would be in here with a heartfelt impassioned defense of a white killer before I even clicked on it.  How predictable!"

I defended him?? OMG!! Can you read Tequisha? I said the article was weak since there was no documented proof that the man was racist. And I also said I hope he gets the death penalty for what he did! If you are advocating the death penalty for a crime committed -how is that defending someone? Put the crack pipe down Sweetie -its bad for your brain cells!

NSpiritA1
Xeondarrious you are the most histrionic flailing in the wind, self hating overly emotional and overreacting cracker by proxy Negro known to mankind.

I'm sorry your uncle Ray Ray played tickle with you and now you have some unresolved ambivalence.
3/3/151:11 PM
❤️ 1

"Xeondarrious you are the most histrionic flailing in the wind, self hating overly emotional and overreacting cracker by proxy Negro known to mankind.

I'm sorry your uncle Ray Ray played tickle with you and now you have some unresolved ambivalence."

What?? That's it??? That's all you got? More silly pathetic name calling? Never an argument or commentary with a sliver of intelligence? Ok....ok...you win! Ha! Ha! Ha! Ha! Ha!

NSpiritA1
It's certainly an apt description of all you have ever offered on AfricanAmerica.org. There is not one discussion to which you've contributed anything meaningful nor intelligent. I'm glad you've been able to do some self reflection on your general uselessness here. Bravo!
3/3/1510:48 PM
❤️ 0

"It's certainly an apt description of all you have ever offered on AfricanAmerica.org. There is not one discussion to which you've contributed anything meaningful nor intelligent. I'm glad you've been able to do some self reflection on your general uselessness here. Bravo!"

Really? Why is that? Because I give commentary that is not popular? Because I'm telling lies? Posting outright fabrications? The problem with you (and other so-called detractors) is you have very thin skin to opinions that you disagree with. I read many posts in this forum that I totally disagree with. I comment on a few but most I say nothing. Why? Because I feel you are free to post your beliefs whether I like it or not. But I am not given that latitude. Instead, I respond to insults and silly name calling (troll, proxy Negro, etc). And that's ok. I'm a big boy. I can take the heat.

I've said this a hundred times before, you, like most detractors cherry pick what I say. It seems that if a person is not spewing negative comments about whites (or whoever) or posting diatribes against the government, police, etc, or cosigning someone's rants -then they are useless, not contributing or a troll. If you had taken the time to read all my posts, you will see where I have condemned racists or bad behavior of whites (since that seems to be the litmus test for acceptability).

You suggest that I am not intelligent yet your only response to what I post is more name calling and personal attacks. THAT IS YOUR RESPONSE! NEVER A COMMENTARY OF WHY I AM WRONG OR WHY YOU DISAGREE. Take a look at yourself my friend before taking the cheap way out -more personal attacks and name calling!