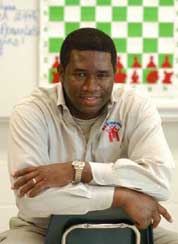 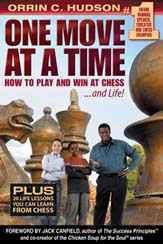 Jakes called Be Someone founder Orrin Hudson, an African American national chess champion, #1 Best Selling author, motivational speaker and transformational coach. Hudson's fast paced, comedic teaching style held the students attention as they listened intently as he coached them on how to be winners at chess and champions for life.

Project Destiny students were unranked in the first annual GAAE statewide chess championship held in Augusta, GA. Although unranked, they did not go unnoticed. Thanks to Hudson's expert coaching, these students rallied to the call of champions, snagging first place honors.

"What is so amazing about these kids is they had never played in a chess championship. They traveled 2 ½ hours to compete for the state title. When they arrived, they were intimidated by the other students, whose logo was a chess bishop. Most of the opposing team had been playing chess since they were five years old, and all the way through high school." Orrin Hudson

Hudson advised his team that champions never quit. "The students approached me and said, 'Coach, we're afraid!' I told them to keep their head in the game and their mind off their opponent. The chess board is the 'board of education'. It levels the playing field. No one has the advantage. You have a gold mine between your ears, and that is where the answers are. You have the same amount of resources. The board plays no favorites. Play your best game!"

Using his "KASH is King" model Hudson, founder of the Be Someone crime prevention and educational program, taught the Project Destiny students to take charge of their personal destinies. He described the new currency that will take the nation by storm and provides the key to achievement: "K = knowledge, A= attitude, S = skills, H = habits!" The former state trooper and US Air Force veteran uses all his leadership skills to instruct students on life mastery techniques, teaching them how to "Think it out, don't shoot it out!" and "Push pawns, not drugs!"

Hudson is planning a nationwide tour to major cities, bringing his "KASH is KING!" concept to churches, community centers, schools and any venue that will open its doors to help improve the lives of children. "We need everyone's help! We want to partner with parents, children, civic centers and corporations. Our goal is to increase self esteem in children in order to teach them how to be winners for a lifetime," he says.

To learn more about the award winning programs at Be Someone or to donate online, visit www.besomeone.org
3/11/063:36 AM
❤️ 0
Original Post

quote:
The chess board is the 'board of education'. It levels the playing field. No one has the advantage. You have a gold mine between your ears, and that is where the answers are. You have the same amount of resources. The board plays no favorites. Play your best game!"

now there's a quote - and a champion.

I remember when there would be games in the park and on some corners. Could always find a game to watch.

I'd think all those are false memories if it weren't for the chess board tables in those spots today.

Sign In To Reply
Post
I Can't Breathe': Man Dies After Minneapolis Police Officer Seen Kneeling On His Neck
23 hours ago