A Financial Dictator for Detroit

AFRICANGLOBE – With the appointment of an emergency manager on Thursday, Detroit became the largest city in US history to be taken over by the state government. The new manager, bankruptcy lawyer Kevin Orr, will have vast powers and one essential task: to carry out a brutal assault on the jobs and living conditions of the mostly Black residents of Detroit.

What is taking place in Detroit has national and international significance. The Financial Times of London cited one person involved in the discussions on the imposition of a financial manager as saying, “This will be the best case study of what it means to restructure a city.” In an editorial, the newspaper called for “radical—and unpopular—action” to address Detroit’s financial woes, a position shared by virtually every mass circulation newspaper in the US.

The “restructuring” of Detroit is a euphemism for a slash and burn policy of destroying city jobs, cutting wages and pensions, gutting social services from sanitation and firefighting to health care and education, and handing over city assets to private bankers and speculators. The very social forces responsible for the city’s present state are utilizing the crisis of their own making to step up their plundering of public resources and further redistribute the wealth from the bottom to the top.

Exhibiting the ruthlessness that is a hallmark of American vulture capitalism, the ruling class, in the pursuit of its program of social counterrevolution, is dispensing with the trappings of democracy and imposing a bankers’ dictatorship over the city.

The broad consensus within the political establishment for these measures was on display Thursday. At a press conference announcing the decision to appoint Orr, a lifelong Democrat, Republican Governor Rick Snyder stood side by side with Detroit’s Democratic mayor, David Bing, who pledged his support. The formal decision to hire Orr and set his salary at $275,000 was made by the state’s financial board, headed by Michigan Treasurer Andrew Dillon, also a Democrat.

As for the Democratic Party-controlled City Council, it has opposed the appointment of a financial manager on the grounds that it can more effectively impose the sweeping cuts demanded by the banks and auto bosses.

Among the considerations in naming Orr is, no doubt, the fact that he is African American. For decades, the Democratic Party establishment has employed racial politics to divide and rule Black voters. To the extent that there has been no opposition to the emergency manager from within the political establishment, it can be summed up in a simple statement “White Lansing” now controls “Black Detroit.” Yet Orr, like Bing, is no less ruthless a representative of the White establishment than Snyder and Dillon.

Behind these local and state officials stand the Obama administration and the Wall Street financial interests that it represents. The administration views Detroit as a model for its plans nationwide.

The identity of the person chosen to fill the position of emergency manager indicates what is in store for the vast majority of Detroit residents. Orr played a critical role in the 2009 bankruptcy of Chrysler, part of the Obama administration’s restructuring of the auto industry, which was carried out with the full support of the United Auto Workers union. This involved the closure of dozens of plants, the elimination of tens of thousands of jobs, the halving of the wages of newly hired workers, cuts in benefits, and a ban on strikes.

Orr will have a similar agenda for the city of Detroit. Already, Bing and the City Council have imposed a 10 percent wage cut and laid off thousands of city workers. Basic social services have been slashed.

By the end of the month, under a new law passed at the end of last year, Orr will have the power to rip up labor contracts, cut social programs and sell off city assets. The possibility of throwing the city into bankruptcy is being actively considered, since such a move would provide a legal fig leaf for cutting the pensions of current retirees.

The all-purpose justification for these measures is the claim that there is no money to provide for basic social services. The population of Detroit, more than a third of which lives in poverty, has supposedly been “living beyond its means” and stubbornly refusing to make the “hard choices” dictated by the crisis, which is inevitably presented as something akin to an impersonal and socially neutral act of nature.

The “no money” pretext is a lie. The deficit of Detroit stands at $327 million. In comparison, a handful of billionaires in the state have a net worth of $24 billion, close to 75 times the budget deficit. A mere ten percent surtax on the wealthiest nine individuals in Michigan would cover the city’s deficit 7 times over.

The Wall Street investors seeking to make a killing off of Detroit’s municipal bonds pull in hundreds of millions or billions of dollars every year. Wall Street giants such as Bank of America, JPMorgan Chase and UBS have extracted more than $474 million from the city in fees related to the sale of debt, according to a report from Bloomberg News.

The Big Three auto companies, to which Obama has pointed as an example of a resurgent Detroit, made over $11 billion in combined profits last year, thanks to the imposition of poverty-level wages. The top executives have awarded themselves tens of millions of dollars.

The fate of Detroit epitomizes the process by which vast sums of money have been accumulated by the financial elite through the dismantling of industry and neglect of the social infrastructure.

Since the crisis of 2008, hundreds of billions of dollars have been used to bail out the banks and push stock prices to record highs. The Federal Reserve prints $85 billion every month, 260 times the deficit of Detroit. This money is handed out to the banks and used to fuel new speculative bubbles.

Cities and states throughout the country are implementing similar measures to those being carried out in Detroit. At the national level, after trillions of dollars in budget cuts, the Obama administration is conspiring with Republicans to slash trillions more from the key federal health care and retirement programs.

This program of austerity for the working poor and record profits for the corporations is international. In Greece, Spain, Italy and other European countries, governments installed by the banks are imposing depression conditions to ensure that national treasuries, bled dry to bail out the banks, are able to pay off major investors and bondholders.

Against the demands of the billionaires, workers should advance a program in defense of basic social rights—the right to a job at a decent wage, the right to education, health care, housing, a secure retirement.

The essential task now is the building of a political leadership to organize these struggles of the residents of the City of Detroit and direct them against the system of exploitation. 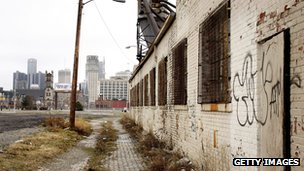 An emergency financial manager with wide-ranging powers has been appointed for the troubled US city of Detroit, in the biggest state takeover for years.

Kevyn Orr, a lawyer who worked on restructuring the carmaker Chrysler after bankruptcy, will be able to override elected officials.

Detroit's finances have deteriorated because of the decline in the car industry, mismanagement and corruption.

Mr Orr was appointed by the Michigan state Governor Rick Snyder, who described the situation as a "crisis" and something that had to be resolved.

He will have the power to override its elected officials, rewrite labour contracts, privatise services and sell assets.

"We can rise from the ashes," Mr Orr told a news conference. "This is a beautiful city and a wonderful state that gave me my start. I feel compelled to do this job."

He added that if his emergency takeover succeeds "it will be one of the greatest turnarounds in US history".

Mr Orr said the city had been given 12 to 16 months but said he hoped to finish the job faster.

Once the centre of the automotive industry, Detroit's population has more than halved from its peak of 2 million in the 1950s. It was once the fifth-largest city in the US; now it is the 18th, with 700,000 inhabitants.

The city has been running a deficit for nearly 10 years, struggling under the weight of its pension and health insurance commitments.

The BBC's Jonny Dymond, in Washington, says the 50-year decline of "Motor City" has reached a new low point.

But he adds this may not be the nadir; bankruptcy still looms if Mr Orr cannot get a grip on Detroit's finances.

This week, a former Detroit mayor, Kwame Kilpatrick, was convicted on charges of corruption and bribery. He was found guilty on 24 charges that included racketeering, fraud and collecting kickbacks for city contracts.

The move was greeted positively by analysts. "I think Snyder will be remembered as the politician who saved Detroit," said Jim McTevia, a specialist in restructuring at the financial consultancy McTevia & Associates.

"Make no mistake, Detroit is bankrupt. In this set of circumstances, there is no downside for the governor."