Here’s what they never taught you in school.

In 1492, Columbus sailed the ocean blue, so goes the elementary school rhyme. But Columbus also committed numerous crimes against humanity that we never learned about in school.

This coming Monday, whenever you see a status update or tweet mentioning Columbus Day, share this article in response.

On the anniversary of Columbus’ landing, it’s important for everyone to remember that Christopher Columbus was one of the most evil men to ever walk the earth, and that the myths propagated about him were completely wrong.

1. Columbus never once reached the mainland US.

The closest he got was Cuba, on his first voyage. Even on his second, third, and fourth voyages, Columbus reached Central America and the island of Hispaniola (now Haiti and the Dominican Republic), but it wasn’t until April of 1513 when Europeans first set foot on the mainland US, when Juan Ponce de Leon sailed to Florida from Puerto Rico.

A map of Columbus’ 4 voyages, shown below, reveals exactly how far Columbus actually was from the New World.

2. Columbus misrepresented the natives who rescued him as cannibals.

Upon his arrival to the Bahamas, Christopher Columbus wrecked the Santa Maria.

The native population worked for hours to rescue the crew and their cargo.

Despite the natives’ kindness, Columbus’ mind immediately went to how profitable enslaving the native population would be. In his journal, Columbus wrote,

“…With fifty men they can all be subjugated and made to do what is required of them.”

Despite the natives’ kindness and hospitality, Columbus later described the indigenous population as cannibals, when he wrote in 1493:

“(They are) evil and I believe they are from the island of Caribe, and that they eat men.”

Columbus elaborated, describing them as “savage cannibals, with dog-like noses that drink the blood of their victims.”

3. Columbus’ sailors were rapists and murderers.

On Columbus’ second voyage, he was accompanied by 1,200 men, who viewed the native population as theirs to exploit.

One particularly sickening account of the raping and pillaging that Columbus’ men carried out was from Michele de Cuneo, a wealthy aristocrat who called Columbus a close friend:

“While I was in the boat I captured a very beautiful Carib woman, whom the said Lord Admiral gave to me, and with whom, having taken her into my cabin, she being naked according to their custom, I conceived desire to take pleasure.

I wanted to put my desire into execution but she did not want it and treated me with her finger nails in such a manner that I wished I had never begun,” de Cuneo wrote. “But seeing that, (to tell you the end of it all), I took a rope and thrashed her well, for which she raised such unheard of screams that you would not have believed your ears.

Finally we came to an agreement in such manner that I can tell you that she seemed to have been brought up in a school of harlots.”

One of the few men accompanying Columbus who eventually grew disgusted with his actions was Bartolome de Las Casas.

De Las Casas bore witness to the atrocities the Spanish colonists committed on the native populations, and was so moved by his experiences that he renounced his past life and became a friar, committed to social justice for indigenous populations.

In one of de Las Casas’ letters, he describes the monstrous brutality of the colonists toward the natives, including nursing mothers and their babies.

“They attacked the towns and spared neither the children nor the aged nor pregnant women nor women in childbed, not only stabbing them and dismembering them but cutting them to pieces as if dealing with sheep in the slaughter house,” de Las Casas wrote.

“They laid bets as to who, with one stroke of the sword, could split a man in two or could cut off his head or spill out his entrails with a single stroke of the pike.

They took infants from their mothers’ breasts, snatching them by the legs and pitching them headfirst against the crags or snatched them by the arms and threw them into the rivers, roaring with laughter and saying as the babies fell into the water, ‘Boil there, you offspring of the devil!'”

Columbus could only justify his multiple voyages across the Atlantic Ocean by assuring King Ferdinand and Queen Isabella that the newly-discovered lands were rich with gold. So on his subsequent voyages, Columbus was pressured to deliver.

The native populations were quickly enslaved and forced to mine at least a thimbleful of gold every three months.

In A People’s History of the United States, Howard Zinn described the gradual genocide of indigenous populations in the Bahamas, saying they were “worked at a ferocious pace.”

“In two years, through murder, mutilation, or suicide, half of the 250,000 Indians on Haiti were dead,” Zinn wrote. “By the year 1515, there were perhaps fifty thousand Indians left. By 1550, there were five hundred.

A report of the year 1650 shows none of the original Arawaks [on the Bahamas] or their descendants left on the island.”

After several voyages and raping and pillaging, Columbus and his men grew increasingly depraved.

When he was replaced as governor of Hispaniola and recalled back to Spain in 1500,he wrote in a casual tone of how he provided sex slaves to his men, some of whom were small children, for a high price.

Death and Taxes called Columbus “the pimp of the New World.”

“A hundred castellanos are as easily obtained for a woman as for a farm, and there are plenty of dealers who go about looking for girls; those from nine to ten are now in demand, and for all ages a good price must be paid,” Columbus wrote.

A depiction of Columbus’ hunting dogs feeding on natives.

In the book A Dog’s History of America, author Mark Derr described the horrific pasttime of Columbus and his men: using dogs to hunt natives instead of foxes.

This hellish sport was referred to as the monteria infernal. Derr also described how the dogs brought over from Spain were bred specifically to have a bloodhound’s scent, with the long legs and crushing jaws of a mastiff, used to hunt down and kill natives.

Natives were even pitted against these dogs in barbaric, gladiator-style death matches. A native would be armed with nothing but a stick and stripped naked, and colonists would entertain themselves by watching the dogs maul the natives by decapitating them with their jaws.

The natives grew to fear being thrown to the dogs as the worst form of death.

7. Columbus was brought back to Spain as a prisoner, but was immediately pardoned.

Columbus, after being stripped of his title

News of the atrocities committed by Columbus and his men along with his mismanagement of the island’s resources created enough outrage that in 1500, he was stripped of his official title as governor of Hispaniola and ordered back to Spain in chains.

But King Ferdinand liked Columbus so much that he not only pardoned him, but funded Columbus’ 4th voyage.

In just 8 years, Christopher Columbus managed to begin the eradication of an entire indigenous population, put the Trans-Atlantic Slave Trade into motion, and establish precedent for centuries of raping and pillaging by other European colonists.

Rather than observing Columbus Day this coming Monday, take after Seattle, Washington; Richmond, California; Lawrence, Kansas, and other cities and observe Indigenous Peoples’ Day instead. 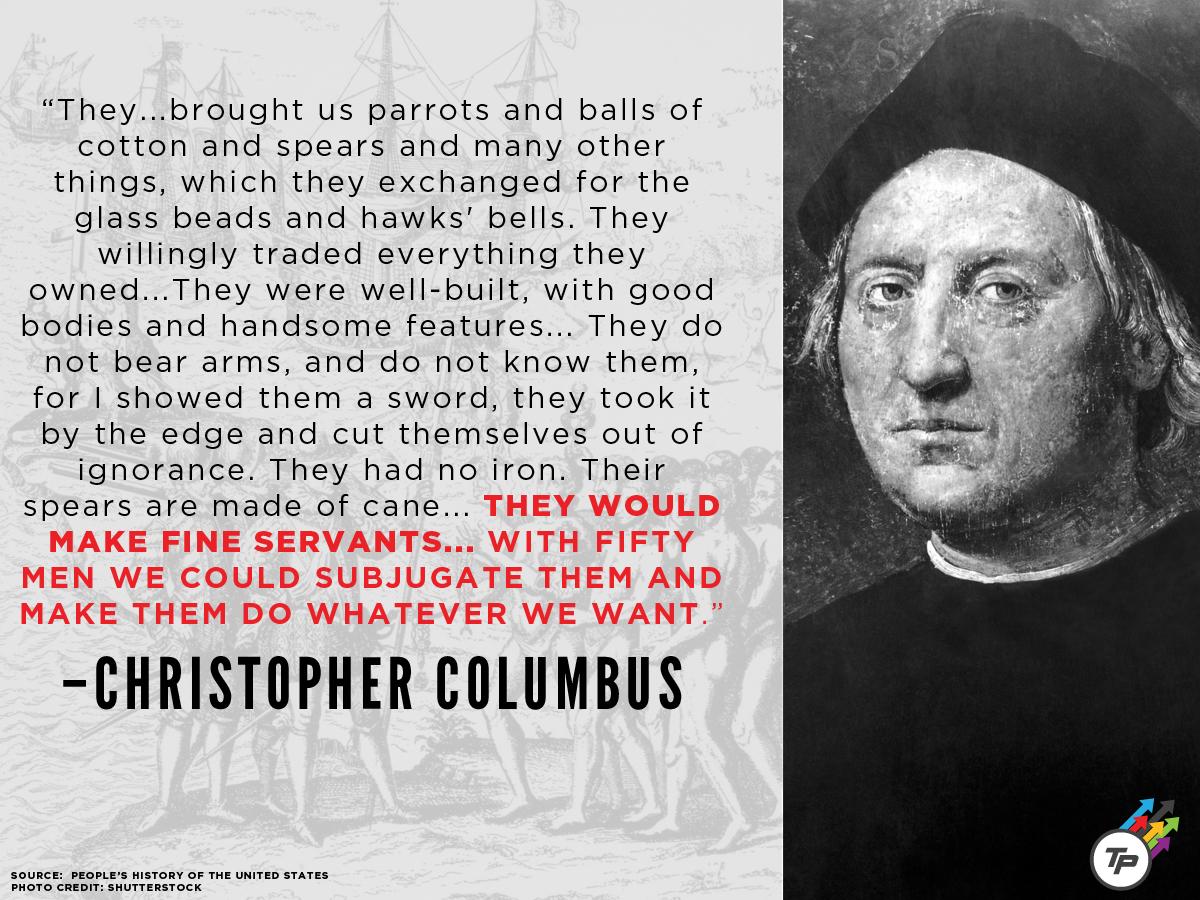 I can't believe anyone would actually name a holiday after such a person. Christopher Columbus was literally a real live, walking and breathing Demon!

But America has a history of celebrating and naming holidays and monuments after men who have committed horrible atrocities and crimes against humanity in life.

And at the same time, rejecting or protesting against a holiday for a man like Martin Luther King, Jr.

Psychopaths and Sociopaths run the world, and humanity has been brainwashed and/or socially conditioned to see their deranged pathology as "normal".

Christopher Columbus, Italian; Amerigo Vespucci, Italian.  America has a thing for Italians. Christopher fed natives to the dogs; white folks threw African babies to the alligators.  Pretty much what went on during Columbus' day, goes on today somewhere in the world including here. White folks (Italians are considered white now), just being white folks then and now.