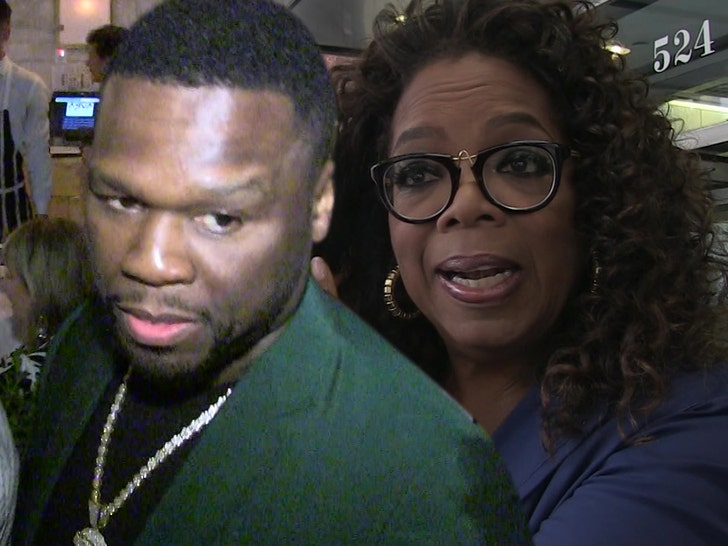 50 Cent thinks Oprah is targeting famous black men accused of being sexual predators ... but gives white guys in the same boat a pass.

The rapper took to Instagram to call O out, saying ... "I don’t understand why Oprah is going after black men. No Harvey Weinstein, No Epstein, just Micheal Jackson and Russell Simmons this sh*t is sad."

Fiddy's referring to the media mogul's upcoming #MeToo documentary featuring Drew Dixon, one of the women who's accused Russell Simmons of sexual misconduct, along with her 'After Neverland' interview of Jackson's accusers, Wade Robson and James Safechuck.

The rapper then shared a photo showing images of Bill Cosby, Jeffrey Epstein, Kevin Spacey, Harvey Weinstein, R. Kelly and Donald Trump ... with "Jail" written on the black men and "Walk" on the white men. He captioned it, "You think Oprah don’t notice how this sh*t is playing out?"

Of course, 50 and Oprah have feuded in the past ... when she criticized lyrics in rap music and he disparaged her audience. They seemingly smoothed things over in a 2012 TV interview, but with Fiddy ... any beef can be renewed.

BTW ... Oprah's documentary, for which she's executive producer, is set to premiere at the Sundance Film Festival in early 2020

Money blinds Black people to the fact that they are still Black People, just like all the rest of us.

I don't have a problem with her 'going after' Black men if they have really did the things that the Black 'R Kelleys, et. al, have been accused of doing.

But, it's disappointing as hell to see how Black media platforms just happen to NOT cover so many atrocities still happening to Black people all over this country, or how they report it in some abstract, disassociated fashion as if THEY are excluded from all other Black people in America.

Why is the Black media not covering all of the police murders of Black men, women and children?

All of the wrongful arrests and convictions of Black men [and women and children] across this country?

All of the sick, twisted incidents of police literally doing body cavity searches of Black girls, women and men in plain view of the public, in parking lots, on the sides of roads, as people walk and/or drive by?

Why is the Black media not talking about the fascist jim crow tactics that racist Whites keep trying to f--k with Black people with all over this country, like demanding I.D. from random Black people entering an apartment complex, or constantly calling the police on Black people for the most trivial of reasons, and/or after making up blatant lies in the first place, and just how many Black people have been literally murdered by cops because of the lies/calls to police?

Why are Black media platforms not talking about this "Civil War" racist Whites are planning "if Trump is not re-elected"?

The few Black media platforms left in America are wasting time on a lot of b.s. topics, when they should be using their platforms to force attention to the racist fascism taking over this country and what Black people/African Americans need to be doing, preparing, planning, to survive it, TO WTFU!.

Well...Fiffy.  If you went to SCHOOL (instead of the streets) and learned "real" European history you would KNOW that white men have always been a pedophile  and sex predator.  And "stuff" like that just ain't in black culture.  If you know anything abut your blackness, you would know that African men i.e. Black men were sexualized by white culture i.e. the pirates and slavers when they kidnapped African men and boys and took them lord knows where and did lord knows what

but most importantly  I never knew why YOU and other rappers referred to the Black women who gave birth to yall as bitches and whores.  Explain.

Black women haven't done a thang to yall but keep yall from shitting your pants as young boys and staying clean.  We can't control what the white man does or does not do.  We can only drop knowledge on OUR own kind.  So if yall don't wanna take our advice and wisdom-well it's on yall.  If yall don't wanna listen cuz yall know everything-then hey it's on yall again.  Why all of a sudden you care?

Wasn't saying nothing when you were spending those dollars and swinging that pendulum.  Hell you've been too busy dating white whores and totally ignore black women as if they had the plague-and we never ever brought diseases to the world-never.  Plus you've been so busy doing massa job by disrespecting us and putting us down that now that you finally raised your head outta your ass and begin to see the light?  You wanna call us out for being real...when we have been REAL all along.  My advice?  Grow the fock up.  Get some balls and start investing in your community....the same community you took part in destroying. Your blood money means nothing and you don't qualify to say a mofo thang about what real Black women are doing in an effort to save our culture.

Bill Cosby was a grown man when he did that to those women-he was following what Hugh Hefner was doing but got caught.  Cuz  he's black-dark-skinned at that.  And R Kelley is a monster.  Cuz  when children are sexually abused like he was and don't get the help/or support they need-nine times outta ten they turn into the very monster that abused them-as in R Kelly's case.  Simmons come from the same rap world you came from that consistently disrespected Black women-What?  You didn't think KARMA wasn't gonna get his ass?  Did you hear me loud enough?  He disrespected Black women.  So for you-a man who turned his back on BLACK women-I ask you just who the fock do you think you are?  I know what it is.  Massa just let you know what a real igger is.  Not the one you rap about in your songs.  And you have the nerve to be shocked it's not the same definition.

Man!  Not good feelin is it?  All this time you've been talking shit backwards.  Sad.  Oh and another advice:  GO BACK TO SCHOOL.  And this time try to LEARN something. And quit trying to put all the BLAME on Black women. Be a MAN and man up to what YOU did wrong-your part in this.