ricardomathA1
Today is the 30th Aniversary of the September 11, 1973 coup in Chile. Hopefully, both Augusto Pinochet and Henry Kissinger will soon be brought to justice for their war crimes and terrorist activities.

A series of declassified US documents have revealed the extent of America's role in the Chilean coup, reports Jonathan Franklin 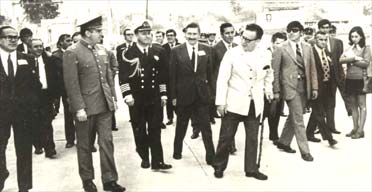 In this never-before-published photograph, General Augusto Pinochet (second from left) and President Salvador Allende (in white jacket) are seen on a trip in northern Chile in the months before the 1973 coup that left Allende dead and Pinochet in command of the government. Photograph: Fundacion Salvador Allende

September 11 1973 was a day of terror and bloodshed in Chile. After months of rising tension, army troops stormed the presidential palace, leaving President Salvador Allende dead and thousands prisoners throughout this previously democratic nation.

Now, on the 30th anniversary of the coup, professors, journalists and citizen activists around the world are continuing to expose the full role of the US government in financing and promoting this bloody coup, which ushered in the 17-year military dictatorship headed by General Augusto Pinochet.

Thousands of top secret documents which were declassified over the past five years have now been synthesized in a new book, The Pinochet File, by investigative reporter Peter Kornbluh of the National Security Archives, a Washington-based investigative centre. "The US created a climate of a coup in Chile, a situation of chaos and agitation," said Kornbluh. "The CIA and state department were worried that the [Chilean] military ... were not ready for a coup."

The top secret documents accumulatively detail the crude workings of Washington during the Cold War. "It is firm and continuing policy that Allende be overthrown by a coup," reads a CIA document from October 1970. "It is imperative that these actions be implemented clandestinely and securely so that the USG [US government] and American hand be well hidden."

Two days after this document was written, top CIA officials proposed a terrorist campaign to stun the Chilean people into accepting a military regime.

"Use good officers ... Some low-level overflights of Santiago and bomb drops in areas not likely to cause casualties could have great psychological effect and might swing balance as they have so many times in past in similar circumstances."

While conservative Chileans argue that the coup was a home-grown affair, the current Chilean minister of education, Sergio Bitar, says: "That internal crisis was activated by the North American policies against it. We see how they energetically obstructed all types of credit from the World Bank and the InterAmerican Bank ... these were decisive actions. This were political and financial pressures that were very relevant [to the ensuing coup.]"

The US effort to destabilise Chile was led by a policy of massively funding and bribing non-leftwing Chilean politicians.

Throughout the 1960s, the US secretly spent millions funding political parties of their choosing - usually the moderate Christian Democrats led by Eduardo Frei Montalva. By the early 1970s, Chilean society had become so leftwing that Washington decided to change tactics. First, President Nixon authorised $10m to be spent "to make the economy scream".

He also authorised pro-coup initiatives designed to destroy the traditional reluctance of Chilean military men to take over civilian government.

"Pinochet will not be a stumbling block to coup plans", reads one memo written six months before the coup, in which the American government looks to build a veritable Dream Team of coup plotters. "The navy and air force are ready ... the military is getting ready to move."

As part of a particularly crude effort to remove army officers who supported democratic rule, the CIA organised to kidnap Rene Schneider, a Chilean army general.

That plot was botched; Schneider died, and today his family is suing the US government and Henry Kissinger in particular for playing a role in his murder.

Citing documents declassified in the past few years, the lawsuit alleges that the US government paid $35,000 to the men who plotted the actions against Schneider.

"I don't want revenge, I want the truth to be established," said a son of the murdered general, also named Rene, who now lives in Santiago and works for a television station.

Immediately after the coup, US officials worked hard to ease international criticism of the human rights record of the Pinochet regime. Rather than fear WashingtonÂ¿s reproach, the military regime repeatedly sought help and advice.

Just weeks after the coup, the US ambassador in Chile sent a memo to Henry Kissinger noting that "the military government of Chile requires adviser assistance of a person qualified in establishing a detention centre for the detainees ... adviser must have knowledge in the establishment and operation of a detention centre".

Even when the full extent of the torture and executions in Chile were well known, the US government sought to integrate the Pinochet regime into international business circles.

Probably no figure more personalised the cruelty of the Pinochet regime than the head of its secret DINA police force, Manuel Contreras.

Previously classified documents now confirm that, not only was Contreras on the CIA payroll, but that when he came to Washington during the height of human rights abuses, the US state department had specific tasks for him.

"Contreras was also asked to check in with Anaconda [Copper] and General Motors to encourage them to resume operations in Chile."

· A documentary, The Other 9/11, is broadcast at 11pm on Thursday September 11 on BBC Four

School of the Americas Watch

quote: Even when the full extent of the torture and executions in Chile were well known, the US government sought to integrate the Pinochet regime into international business circles.

ity:
9/12/0312:07 PM
❤️ 0
sergeantA2
Guess some of this mattered in the 1970's. And as is typical, some assume that the US had total control over the internal workings of Chile, which is never the case in any of these old stories.

Regardless, why is an event over 30 years old, with most the participants now dead even brought up again today? Are you suggesting the US is doing this today in Chile?

Hey, did you hear about the Louisiana Purchase? Better run out and get yours, eh ricardo.

quote:Originally posted by sergeant:
Guess some of this mattered in the 1970's. And as is typical, some assume that the US had total control over the internal workings of Chile, which is never the case in any of these old stories.

Regardless, why is an event over 30 years old, with most the participants now dead even brought up again today? Are you suggesting the US is doing this today in Chile?

Hey, did you hear about the Louisiana Purchase? Better run out and get yours, eh ricardo.

You may not consider it big news, but I assure that the 30th Aniversary of 9/11 is a big deal in Chile. Many of the perpetrators are indeed alive. Our government could help by allowing the extradiction of Henry Kissinger.

Image that, instead of "only" killing 3000 people, Al-Queda had actually succeeded in overthrowing our government and established a military dictatorship in the US, lasting 17 years, resulting in the widespread killing, maiming, and torturing of Americans. Do you think that we would mark the 30th aniversary?

Many are being held in detention pending trial. Among the defendants are twenty-two generals, and forty colonels and lieutenant colonels, HRW said.

"The thirtieth anniversary of the military coup comes at a time when hopes are high that justice will finally be achieved in Chile," said Jose Miguel Vivanco, executive director of Human Rights Watch's Americas Division.

"The Chilean courts deserve great credit for the advances they have made in criminal prosecutions. Now the government must give them the tools they need to bring to trial those responsible for the terrible crimes of the Pinochet era," he added.

Until Pinochet's 1998 arrest in London, most human rights crimes committed during military rule were not prosecuted in Chile. Officials were shielded from justice by a 1978 amnesty decree.

Recent advances in criminal prosecutions have mostly been possible because the courts have ceased applying the amnesty decree in cases of forced disappearance, ruling that the crime is ongoing until the death of the victim can be established, HRW said.

MBMA1
There was a very interesting expose on this on HBO recently. It essentially argued that Kissinger should be tried for war crimes.