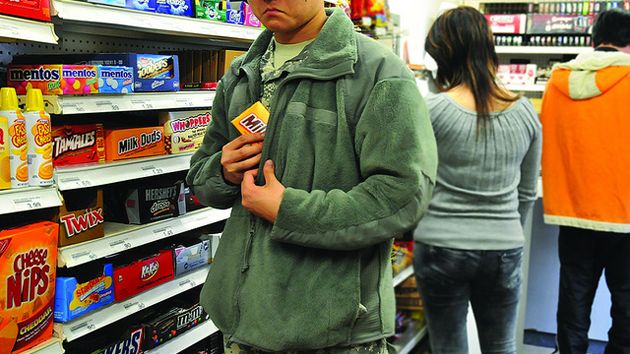 As of last year, according to a report released today by the American Civil Liberties Union, more than 3,200 people were serving life in prison without parole for nonviolent crimes. A close examination of these cases by the ACLU reveals just how petty some of these offenses are. People got life for, among other things…

These are not typically first offenses, but nor are they isolated cases. The vast majority (83 percent) of life sentences examined by the ACLU were mandatory, meaning that the presiding judge had no choice but to sentence the defendant to a life behind bars. Mandatory sentences often result from repeat offender laws and draconian sentencing rules such as these federal standards for drug convictions:

The data examined by the ACLU comes from the federal prison system and nine state penal systems that responded to open-records requests. This means the true number of nonviolent offenders serving life without parole is higher.

What's clear, based on the ACLU's data, is that many nonviolent criminals have been caught up in a dramatic spike in life-without-parole sentences.

Among the cases reviewed, the vast majority were drug-related:

And most of the nonviolent offenders sentenced to life without parole were racial minorities.

Obviously, housing all of these nonviolent offenders isn't cheap. On average, for example a single Louisiana inmate serving life without parole costs the state about $500,000. The ACLU estimates reducing existing lifetime sentences of nonviolent offenders to terms commensurate with their crimes would save taxpayers at least $1.8 billion.

In August, Attorney General Eric Holder unveiled a reform package aimed at scaling back the use of mandatory minimums for nonviolent drug offenders. As Dana Liebelson noted:

Prison reform advocates say Holder's actions don't go far enough. They want the Obama administration to commute the sentences of the thousands of nonviolent offenders now locked away forever. And they support legislation such as the Justice Safety Valve Act, a bill introduced in March by Sens. Patrick J. Leahy (D-Vt.) and Rand Paul (R-Ky.) that would enable judges to hand out sentences lower than the mandatory ones.