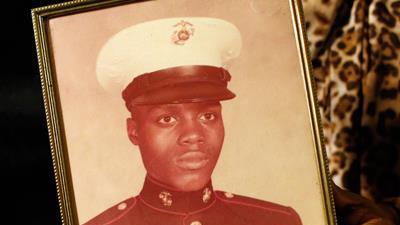 NEW YORK (AP) — The city has reached a $2.25 million settlement with the family of a mentally ill, homeless former U.S. Marine who died earlier this year in a 101-degree jail cell, the comptroller said Friday.

Jerome Murdough, 56, died in a mental observation unit on Rikers Island jail on Feb. 15, eight days after he was sent to the facility because he couldn't afford to pay $2,500 bail on a trespassing arrest.

He was found slumped at the foot of his bed with a pool of vomit and blood on the floor and an internal body temperature of 103 degrees. Officials said he wasn't checked on for at least four hours. His mother, Alma, filed initial papers to sue the city for $25 million over her son's death. But Comptroller Scott Stringer said Friday his office took the unusual step of settling the case before a lawsuit was filed after a review of the facts of the case.

"A mother lost a son, the city lost a citizen," he said. "It is my hope that this settlement provides some small measure of closure for the family of Mr. Murdough. The expedited resolution of this case is in the best interest of all parties."

"On behalf of the city, I am sorry for your loss," he told Alma Murdough.

"This is a very awful thing I'm going through," she said softly. "I'm sorry I cannot say any more." 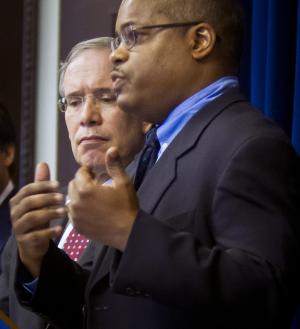 The family's attorney, Derek Sells, said the amount was akin to what a jury might find reasonable, and he was glad Murdough's family would not have to go through a court fight.

"It would be years and years of litigation," he said. "The victims of that tragedy suffer throughout."

Sells said the agreement was a sign that the administration is willing to work with people mistreated by city agencies and officials.

The city comptroller's office also recently settled for $6.4 million with David Ranta, after Brooklyn prosecutors last year disavowed his 1990 conviction in the killing of a rabbi. He'd filed a $150 million notice of claim. But such high-profile cases are not often settled outside court.

The city did not admit liability as part of the settlement with Murdough's family, which will not be allowed to sue the city later on over his death. 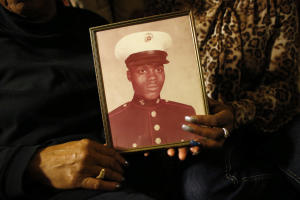 "Today is not a day of joy or happiness," Sells said.

The Associated Press was first to report on suspicions of Murdough's death. An official, speaking to the AP on the condition of anonymity because the official wasn't permitted to discuss the case, said at the time Murdough "basically baked to death."

He had suffered from bipolar disorder and schizophrenia, according to his family, and was on psychotropic drugs that experts say make people on them more sensitive to heat.

The medical examiner ruled the death was caused by hyperthermia due to environmental exposure to heat. His medication also played a role. The death was ruled accidental.

Documents obtained by the AP showed the guard tasked with checking on Murdough left her post and had been disciplined for doing so before, and that jail officials had asked for an excessive-heat problem to be fixed the day before he was found dead, but the repairs were delayed by a long holiday weekend and came too late.

Murdough's death and the death of another mentally ill inmate who died after sexually mutilating himself while locked alone for seven days in a Rikers cell last fall have prompted calls for jail reform. City Council hearings were convened to examine violent conditions at the jail complex and treatment of mentally ill inmates.