Another reason why you don't unnecessarily send children into war ..... 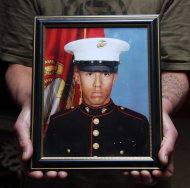 No decision had been made about whether prosecutors will seek the death penalty against Ocampo.

The charges include special allegations of multiple murders and lying in wait and use of a deadly weapon. The minimum sentence if convicted is life in prison without parole.

Ocampo's family said he was a troubled man when he returned from Iraq. Ocampo's own father is also homeless.

The killing spree began in December, raising concerns that a serial killer was preying on the homeless. Police and advocates then went on nightly patrols to urge them to sleep in groups or seek shelter.

Police arrested Ocampo when bystanders chased him down after a 64-year-old man was stabbed to death outside a fast-food restaurant in Anaheim, about 26 miles southeast of Los Angeles.

Julia Smit-Lozano, the daughter of one of the victims, told the Orange County Register (http://bit.ly/zRNO6m) that prosecutors said her father, Paulus Smit, 57, was stabbed more than 50 times outside a library in Yorba Linda on Dec. 30.

Authorities have provided no information on the evidence against Ocampo, or a possible motive. But Anaheim Police Chief John Welter has said investigators are confident they have the man responsible for the murders. 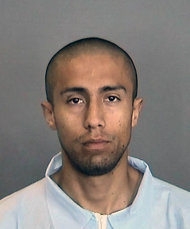 Ocampo is being held in isolation in an Orange County jail, is wearing a protective gown and is being monitored 24 hours a day, said Jim Amormino, a spokesman for the Orange County Sheriff's Department.

"Obviously he has some psychological problems just by the nature of the crimes, so they don't want him to hurt himself," Amormino said.

Ocampo's father, Refugio Ocampo, said his son was deployed to Iraq in 2008 and came back a changed man. He said his son expressed disillusionment and became ever darker as he struggled to find his way as a civilian.

After he was discharged in 2010 and returned home, his parents separated. The same month, one of his friends, a corporal, was killed during combat in Afghanistan. His brother said Ocampo visited his friend's grave twice a week.

Like the men Ocampo is accused of preying on, his father is homeless. His father lost his job and ended up living under a bridge before finding shelter in the cab of a broken-down big-rig he is helping repair.

Just days before his arrest, Itzcoatl Ocampo visited his father, warning him of the danger of being on the streets and showing him a picture of one of the victims.

"He was very worried about me," the father said. "I told him, 'Don't worry. I'm a survivor. Nothing will happen to me.'"

Itzcoatl Ocampo lives with his mother, uncle, younger brother and sister in a rented house on a horse ranch surrounded by the sprawling suburbs of Yorba Linda.

At the home, his mother, who speaks little English, tearfully brought her son's Marine Corps dress uniform out of a closet and showed unit photos, citations and medals from his military service.

The son followed a friend into the Marine Corps right out of high school in 2006 instead of going to college as his father had hoped.

His family described a physical condition Itzcoatl Ocampo suffered in which his hands shook and he suffered headaches. Medical treatments helped until he started drinking heavily, they said.

A neighbor who is a Vietnam veteran and the father both tried to push Ocampo to get treatment at a Veterans Affairs hospital, but he refused. Refugio Ocampo said he wanted his son to get psychological treatment as well.

In addition to the latest victim, John Berry, and Smit, James Patrick McGillivray, 53, was killed near a shopping center in Placentia on Dec. 20 and Lloyd Middaugh, 42, was found near a riverbed trail in Anaheim on Dec. 28.