Those that are overt conscious ethnic/racial nationalists defend their race against all attacks and they are the attackers.

All people are subconsciously ethnic/racial nationalists, all of may not be completely racially/ethnic self interested, but the bias is there in certain cases.

Understand what they are saying by Anti Racism = Anti-White, they are admitting that they are the superior and dominating race on the planet and in most cases in the West,are the only racists. Asian-Americans are second to European Americans in regards to ethnicism against people of African Americans.Yes, African-American is an ethnicity and not a race. African is a race. Also Asians are second to Europeans in racism against the African race.

Racism and Ethnicism is a group activity. A single person cannot be a racist. Only an active agent of racism. Every person in a dominating race/ ethnicity are passive or potential agents of racism/ethnicism just by existing.

Calling someone a White/European Supremacist is also Anti-European/Anti-White because you are suggesting that person is an agent of racism.

The Middle Class and Low Class Europeans in the USA and Europe are worried because they being outnumbered and their Upper Class Elite Europeans are passing legislation everyday against them which further dilute their power and numbers.

Those that do not understand Nationalism will always be confused by European/White Nationalists.

Nationalists do not care about anything but power - they are political realists. There is no morality to nationalism, it is only ethnic and racial survival. A nationalist wants to be able to be a racist or an ethnicist because that is the only way to group prosperity and that's how humans operate. Humans are a successful species due to cooperation and this cooperation has traditionally been along ethnic lines. Now it is along racial lines since the African slave trade, which changed it to a world where ethnicity is of least importance.

Those, especially non-Europeans, especially people of African descent, that believe, that there is such thing as racial/ethnicities a harmony between different races/ethnic, are fools. There is only competition. Something that the European always been aware of because they were the biggest ethnicists in the world and continue to be. 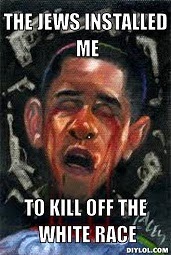 Goodman, are you here to destroy the white race or are you a defender of Jorge Zimmerman?