THE BLACK ROOTS OF THE FILIPINOS: MOORISH HISTORY – BY FILIPINO

Our ancestors in the Philippines are ebony Black, from the ancient pygmy tribes Aeta, Ati, Dumagat, Mamanwa, Tagbanua etc. We even share their facial features, even though most of the rest of us were mixed with Malayo-Polynesians, Chinese and Spanish and so our skin is now brown and so some of us have some Asian and European features too.

There is an old Philippine story we still tell among ourselves of how 10 Datus (chiefs) from Borneo arrived on the island of Panay in prehistory. They were running away from the expansion of Muslim kingdoms over their old Srivijaya kingdom in what is now our kin nations of Indonesia, Brunei and Malaysia. There, the 10 Datus met the paramount king of the original Black Ati people called Marikudo, who traded some of his coastal land with Datu Puti, the prime minister of Rajah (king) Makatunaw for a salakot (conical hat) made of pure gold, silk and other gifts; then honored the oath in a blood-oath ritual which we call “sandugo”. He agreed that the Ati share the land with the many thousands of Malayan refugees called Visayans, and as the sandugo was already done, both groups (Visayan and Ati) were immidiately to be considered as kin, so of course we intermixed. The Ati who returned to the hills had a terrible harvest many many years later, and famine ensued. They made their way down to the coast and their Malayan cousins (the Visayan people) remembered their sandugo with them, and provided their Black kin with food and provisions. The Ati and Visayans feasted as a result of the end of the famine. To this day this feast still exists called “ati-atihan” (To blacken) in which the Malayan descendants of the 10 datus in panay island blacken their faces in gratitude and dance to the same rhythm they danced with to celebrate the sandugo of blacks and malayans (when the Spanish came, they forced the natives to dedicate it to the Child Jesus/Santo Nino, but we Filipinos know the 10 Datu story and know the real reason why it is still performed).

Our islands became rich, so much so that the other Asians called us Suvarnadvipa (land of gold). One group of Visayans moved north to become the Tagalog people, who are the people of Manila our capital city, and their language is the government language now of our country. When the Spanish colonizers came in the 1500s, they changed this peaceful coexistence.

This is how the Tagalog (main ethnic group of Manila) upper-classes looked when the Spanish first arrived in the 1500s: 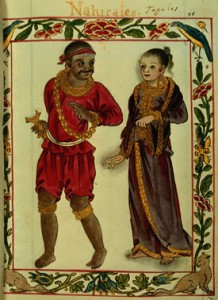 Note the black skinned chief with brown skinned queen, the two native groups in the Philippines, and all the gold and silk worn.

When the Spanish came, they force converted the mixed coastal Malayan population like the Tagalogs and Visayans to Catholicism, and the Aeta/Ati fled to the forests and island interiors to escape the Spanish. The Spanish then indoctrinated the coastal people against their own dark brown skin and slowly, a self-denigrating culture appeared, along with a history in which they were put onto sugar and hemp plantations, the Spanish soldiers, priests and hacienda owners raped the serf women and stole from villages, and many uprisings were quelled with bloodshed.

In the 19th we won our freedom from the Spanish, albeit for a short while, because the Americans then took over and immediately called us the “Niggers of Asia”. In some ways they were worse than the Spanish. This is how they depicted us in their newspapers: 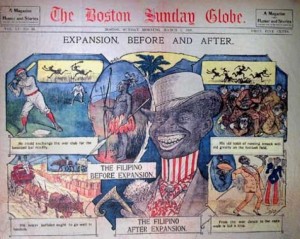 We are now an independent nation, but we have so many scars from our past that as a result, so many of our women are caught up with whitening their skin nowadays to look “mestizo”, due to post-colonial mentality. Shade-ism exists in full force in our media, and the poor in our country who do not finish their full education have no idea that they too are the descendants of Black people, and are quick to call on how different the Aeta are in their nappy hair, shorter stature and darker skin tones.

Despite this ignorance among some, there will always be Filipinos who will pass our ancient history down to our children, as those who came before us did. Hope this history shares light on the Black history of the Philippines from a Filipino person, which you will not find in Eurocentric history books.