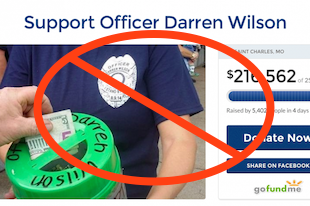 The online fundraising platform GoFundMe is profiting off racially-motivated donors, some of whom are celebrating the police killing of Michael Brown.

Join our campaign demanding that GoFundMe return these profits and take down Darren Wilson fundraising pages.

In the past week, a fundraising effort has been started to support Darren Wilson, the officer responsible for the police killing of Michael Brown.

They were so successful with their first page, that they’ve started a second page, raising over $300,000 in total, so far. And GoFundMe takes 5% of every donation processed, meaning the company has already made more than $15,000.

Take a look some of the donor comments below. They will make your blood boil.

"Waste of good ammo. It's my privilege to buy you a replacement box.”

“I thank all Police…protecting normal Americans from aggressive and entitled primitive savages."

"Black people can be their own enemy and I am not white…He was shot 6 times cause the giant wouldn't stop or die. Evil people don't die quick”

“Let this ‘GoFundMe' serve as an example to all cops in America: The general public will support you, especially if you pull the trigger on violent criminal thugs.”

Here's the letter we'll send to GoFundMe executives on your behalf. You can add a personal comment using the box provided.

Dear GoFundMe co-founders Brad Damphousse and Andy Ballester, and Kelsea of GoFundMe Customer Happiness, I write demanding that you return any profits from donations for Darren Wilson on your platform. Further, please take down any related fundraising pages.

These types of disturbing fundraising efforts have no place on the world's #1 personal fundraising site.