quote:
Originally posted by EbonyRose:
Those soldiers have been telling the military - and their doctors - that they have been overstressed and brain damaged from multiple deployments for YEARS now.

The military tells them there's nothing wrong with them and sends the back out for another tour.

Maybe those in charge will start to listen to what these men and women are trying to say to them, now! 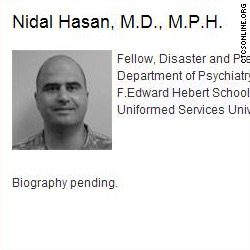 NBC news just reported that the Army Major Malik Nadal Hasan, 39, who was the gunman, was a Army doctor (Psychiatrist) and he was about to be deployed to either Iraq or Afghanstan.

Gunman was harassed by other military members because he was Muslim and of Eastern desent.