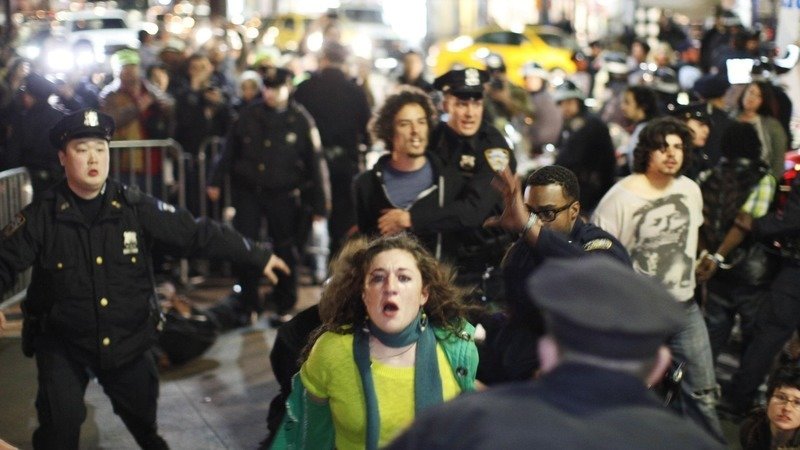 A few years ago, I was sexually assaulted by a New York City police officer as I peacefully protested during the Occupy Wall Street movement. A male officer involved in the incident grabbed my breast so hard that a bruise was left in the form of his handprint on my chest. When I attempted to protect myself from this assault, I was thrown to the ground, beaten on the head, and left there as I suffered a seizure. I was charged with assault, convicted and ended up in Rikers Island prison for 58 days.

I didn’t resist arrest, but my experience is indicative of how police can easily abuse their power and get away with it. Now, in the wake of police brutality cases,New York City Police Department Commissioner Bill Bratton wants to give officers more power by making resisting arrest a felony charge. That would put the penalty in the same category of crimes as murder, kidnapping, arson and aggravated assault. I’m calling on the NY State Assembly and Governor Cuomo to make sure that doesn’t happen.

The proposed change would give officers more reason to bring these high-stakes charges -- charges that are overwhelmingly dropped by judges in the judicial process. Recent research found that, since 2009, only 6 percent of these charges handed out by NYPD officers resulted in conviction. On top of that, only 15 percent of officers accounted for 75 percent of all resisting arrest charges. This change would surely give greater power to a small minority of potentially abusive officers.

Many people I know are concerned thatpolice can easily use the resisting arrest charge as cover for excessive force against citizens.What’s more concerning is that this move would do more harm to the people that police are meant to protect and serve. It could lead to longer prison sentences, disenfranchisement and loss of government assistance. And any trumped-up felony charges could give someone a permanent criminal record, making the rest of their life a living nightmare (as it has for me).

Changing the resisting arrest charge from a misdemeanor to a felony will give more power to the police -- specifically the most abusive officers -- and will make life more difficult for anyone who gets on the wrong side of certain cops. We need to tell the New York State Legislature and Governor Cuomo that this change would be the wrong choice for New York. Will you sign this petition?

LETTER TO
New York State Senate
Governor Andrew Cuomo
New York State House
I’m calling on the NY State Assembly and Governor Cuomo to put citizens first by ensuring that a resisting arrest charge is not categorized as a felony in the state of New York.
2/21/158:47 PM
Original Post