WASHINGTON (AP) — Hillary Rodham Clinton isn't president, but Dick Cheney says that if she were in the White House rather than Barack Obama, then things might be different today in the country.

Cheney isn't getting into specifics, but he does think that "perhaps she might have been easier for some of us who are critics of the president to work with." 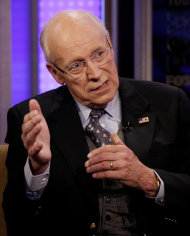 The former vice president tells "Fox News Sunday" that it's his sense that the secretary of state is "one of the more competent members" of the Obama administration and it would be "interesting to speculate" about how she would have performed as president.

Clinton lost the 2008 Democratic nomination to Obama, who went on to beat Republican John McCain in the general election. Obama named Clinton as the country's top diplomat.