NSpiritA1
I wonder what will be said about her: 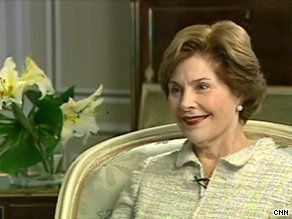 WASHINGTON (CNN) — Former first lady Laura Bush is defending President Obama's decision to address the nation's school children, telling CNN Monday that it is "really important for everyone to respect the President of the United States."

"I think that there is a place for the President of the United States to talk to school children and encourage school children, and I think there are a lot of people that should do the same," she told CNN's Zain Verjee, in an interview set to air Monday on The Situation Room. "And that is encourage their own children to stay in school and to study hard and to try to achieve the dream that they have."

The former first lady said she believed criticism of the speech had arisen because of the accompanying lesson plans. If parents are opposed to the address, said Bush, "That's their right. You know that certainly is the right of parents to choose what they want their children to hear in school… (But) I think it's also really important for everyone to respect the President of the United States."

Does she think it's fair to criticize Obama, as some have, by labeling him a socialist? "I'd have no idea whether it's fair, do you think I thought it was fair when President Bush was criticized — not really. So, I guess not," she responded.