After football players at the University of Missouri said they won't participate in team activities until university President Tim Wolfe is removed from office, the team's coach tweeted today in support of his players.

The ConcernedStudent1950 protest organization, which says it represents every black student at the University since 1950, when the first black student was admitted, released a list of demands on Oct. 20 that included Wolfe's removal, as a part of a protest over the way the university handles racial harassment.

Black graduate student Jonathan Butler started a hunger strike this week in support of the protest.

Gov. Jay Nixon weighed in today, saying the "concerns must be addressed."

The governing body of the University of Missouri system announced late today that it is calling a special meeting for 10 a.m. Monday, and that part of the meeting may be closed to the public. According to the announcement, Missouri law allows the group to meet in a private "executive session" to discuss topics such as privileged communications with university counsel or personnel matters.

Running back Russell Hansbrough tweeted Saturday night that the athletes of color on the Missouri football team "will no longer participate in any football related activities until President Tim Wolfe resigns or is removed due to his negligence toward marginalized students' experiences."

A statement this afternoon from the athletic director and football coach said there would be no football practice today.

“After meeting with the team this morning, it is clear they do not plan to return to practice until Jonathan resumes eating," the statement said. The athletic director and coach added that their focus is on Jonathan's health and they will provide further comment Monday afternoon.

A statement from Wolfe Friday said: "Today I again had the opportunity to meet with MU graduate student Jonathan Butler who continues a hunger strike protesting the inequalities, inequities, and obstacles faced by students, faculty and staff at the University of Missouri. I am very concerned about Jonathan’s health. His voice for social justice is important and powerful. He is being heard and I am listening. I am thankful for the leadership provided by him and the other student leaders in raising awareness of racism, injustice, and intolerance. This afternoon I also met with representatives of several student groups and I value their input and hear their voices.

"Racism does exist at our university and it is unacceptable," the statement said. "It is a long-standing, systemic problem which daily affects our family of students, faculty and staff. I am sorry this is the case. I truly want all members of our university community to feel included, valued and safe."

Wolfe also apologized for an incident during the school homecoming parade on Oct. 10, during which a protest group temporarily stopped the parade, and according to ABC affiliate KMIZ-TV, Wolfe's car allegedly bumped into one of demonstrators. 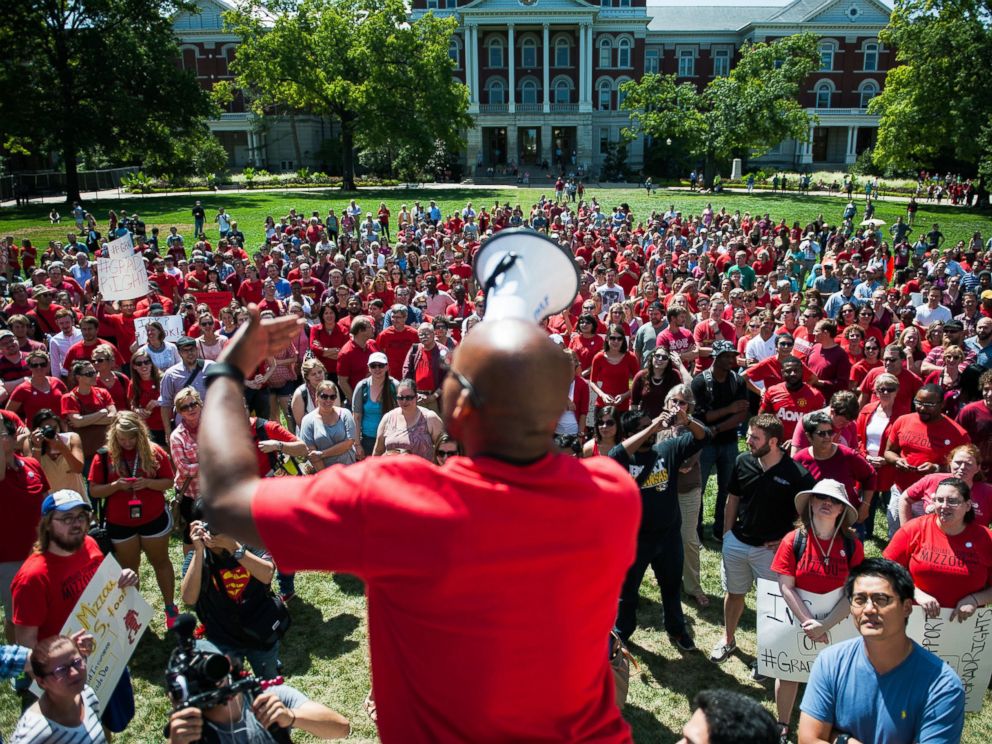 Daniel Brenner/The Columbia Daily Tribune/AP Photo
Jonathan Butler encourages a crowd to scream while using a megaphone during a "day of action" to celebrate graduate students and draw attention to demands on Aug. 26, 2015, near the columns on the University of Missouri campus, in Columbia, Mo. END_OF_DOCUMENT_TOKEN_TO_BE_REPLACED

But Butler posted what he called "An open statement to those still supporting Tim Wolfe" on Facebook Saturday morning, in which he said Wolfe has been president for three years and has not made changes despite concerns about racism repeatedly being raised.

"He had time," Butler wrote. "His time is up. He is not the best option for the UM system. I assure you...we can find someone better."

Besides Wolfe's removal, the group's list of demands includes a comprehensive racial awareness and inclusion curriculum and an increase of black faculty and staff to 10 percent by the academic year 2017­-2018.

Wolfe said today the university has begun work on a system-wide diversity and inclusion strategy.

"The majority of items listed on the Concerned Student 1950 List of Demands were already included in the draft of the strategy," he said.

"We are open to listening to all sides, and are confident that we can come together to improve the student experience on our campuses," Wolfe said. "We want to find the best way to get everyone around the table and create the safe space for a meaningful conversation that promotes change. We will share next steps as soon as they are confirmed."

The Associated Press contributed to this report.