FinalCall.com) - The family of Martin Lee Anderson, a 14-year-old who died in early January after entering a Florida boot camp for juveniles, asked that his body be exhumed for a second autopsy, according to various news reports. 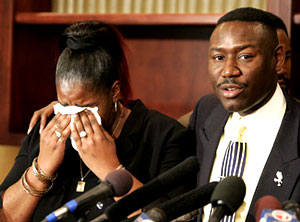 The family attorney told the Associated Press (AP) that Dr. Michael Baden, a New York City-based forensic pathologist who reviewed the medical evidence in the slaying of civil rights leader Medgar Evers, would be asked to perform the second autopsy. The AP said that Dr. Baden has not responded to calls for a comment.

A videotape shows young Anderson being beaten, kneed and dragged by guards at the Panama City facility only hours after his arrival, but the chief medical examiner ruled that Martin died from natural causes not related to the beating.

"This child is the modern-day Emmett Till," argues Florida State Senator Frederica Wilson. "You have to see the photos of this child's face to understand what I am saying."

Sen. Wilson said that the Bay County boot camp was closed Feb. 21 after the Florida State Black Legislative Caucus and Florida State office of the NAACP demanded its closing.

"The Black Legislative Caucus has closed down 10 of the 17 boot camps in the state of Florida, and you have to know that the Bay County facility was the worse," Sen. Wilson said.

"There is a serious need for systemic changes, and we won't stop pressing the state to deal with these issues," Florida NAACP state conference chairman Adora Obi Nweze stated, stressing that the madness has to stop.

"These facilities have taken advantage of our young Black men, using chokeholds to make them say, ˜yes sir.' Our children have no voice," she insisted.

Martin was sent to the camp after an arrest in June for allegedly stealing his grandmother's jeep and later violating his probation by trespassing at a school, according to officials. On Feb. 16, the Bay County chief medical examiner ruled that his death was due to a genetic blood disorder caused by a sickle cell trait, which caused him to bleed to death, according to the Miami Herald.

The Florida Southern Christian Leadership Conference (SCLC) said they wanted to hear from the Sickle Cell Disease Association of America on the autopsy findings. The family attorney called the medical examiner's report a "case of home cooking" or giving the sheriff's office what they wanted, according to the Miami Herald.

Activists charge that Martin was the third Black youth to die in a boot camp supervised by the Florida Department of Juvenile Justice.

De Lacy Davis, of the Newark-based Black Cops Against Police Brutality, commented on the racial factor in the case.

"I remember the case of Lionel Tate, who had been sentenced to life in prison at the age of 12 for the accidental death of a 6-year-old family friend," Mr. Davis noted. He and other activists won Mr. Tate's freedom from Broward County Jail a day before his 17th birthday.

"I am talking about a mindset in Florida as it relates to Blacks and the criminal justice system there. Around the time of the Lionel Tate case, there were two young White males who beat their father to death with a baseball bat"”and they meant to kill him"”they were sentenced to seven years," the anti-police brutality activist noted.

According to Ms. Nweze, the NAACP plans on holding a townhall meeting in Panama City to discuss the issue of boot camps. "There is a real sense of urgency on our part to get to the bottom of this," she explained.

Sen. Wilson stressed, "We must find an alternative to these boot camps."