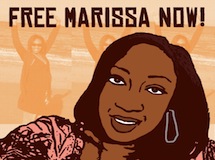 After receiving national attention for failing to secure murder convictions for the killers of Trayvon Martin and Jordan Davis, Florida State Attorney Angela Corey now wants to send Marissa Alexander — a domestic violence survivor and Black mother of three — to prison for the rest of her life.

As long as Angela Corey remains at her post, Florida's criminal justice system will continue to fail Black folks. Please join us in calling on Governor Rick Scott to suspend Angela Corey from office and condemn the charges brought against Marissa.

Here’s the letter we’ll send to Governor Rick Scott. You can add a personal comment using the box provided.

I’m writing to ask you to intervene to correct a grave injustice in the case of Marissa Alexander, a domestic violence survivor and Black mother of three who is facing a harsh 60-year sentence after firing a warning shot during an altercation with her abusive husband. No one was injured in the incident.

In May of 2012, Marissa was sentenced to 20 years in prison, but after immense public outrage, Marissa won her appeal and the guilty verdict was overturned. Now, Florida State Attorney Angela Corey is pushing to increase Marissa's sentence to an outrageous 60 years in a retrial scheduled for this July.

Marissa has been targeted by Angela Corey — a harsh prosecutor who has a reputation for unjustly punishing Black defendants. Corey's actions erode the rule of law and create a criminal justice system that does not provide equal treatment to all.

I urge you to take a public stand and push for a more just outcome in the case and others to come; condemn the charges against Marissa Alexander and suspend Angela Corey from office. Real justice requires that the punishment fit the crime and Marissa's prosecution is indefensibly cruel and unjust.

YOU WILL RECEIVE PERIODIC UPDATES FROM COLOROFCHANGE.ORG. YOU MAY UNSUBSCRIBE AT ANY TIME.