quote:
Originally posted by Empty Purnata:
I have no sympathy for that kind of bullshit. I can't stand the fucking anti-PC crowd that tries to hide racism and bigotry behind "freedom of speech". "Oh, we have freedom of speech to say what we want! That's what makes Western society great! Freedom of expression and exchange. And after all, sometimes the truth is ugly." OH FUCK YOU!!

These same "anti-PC" c*nts would scream for censorship if I drew a cartoon depicting Adolph Hitler baking Jews, or if I drew a cartoon depicting White Christian farmers screwing cousins and sheep, or if I drew a Black/Arab Jesus, or a cartoon of European tribes being sold to powerful ancient African nations as slaves. Imagine if I drew cartoons with a halo over Stalin's head and devil horns on Ronald Reagan. THEY'D BE THE FIRST FUCKERS TO CRY FOUL!! Yeah, they hate being "politically correct", but would be the first ones to get offended if a Malcolm X speech was aired on national TV.

"Anti-PC" is just an excuse for White people to be racist and bigoted in public without being criticized.


If you do shit just to piss of people, don't cry like a b*tch when they bite back. White people can be so f*cking arrogant.

Like Black Viking, I am not anti-PC, but I am anti-censorship. Whether or not I find the comic offensive, I think that a publication has the right to print it and I believe that individuals have the right to protest against it non-violently. I support their right to censure (express harsh criticism of the picture) but not to censor (control the press, speech, artistic expression). Free expression to my mind is integral to democratic society.

Personal anecdote:
I was a chaplain in NYC when Andre Serrano's work was displayed for the first time. For those who don't know, he is famous for "Piss Christ" where he has a photo of a crucifix in a glass of urine. He took pictures with other religious symbols using menstrual blood and semen. When the Catholic Campus Ministry tried to ban a showing of these on Columbia University's campus, our office refused to go along. Just a few years later, there was another incident in the city over an African artist, Chris Ofili, who used elephant manure on a portrait of the Virgin Mary. 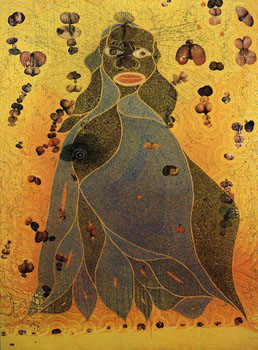