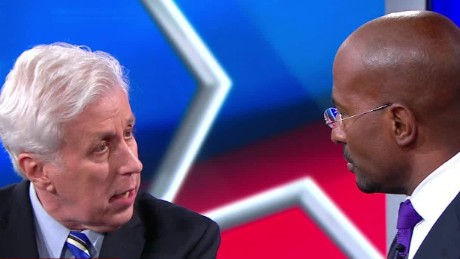 Washington, D.C. (CNN)If the racial tension underlying the 2016 presidential race could be distilled into a single cable news moment, this was it.

On Tuesday night, CNN contributors Van Jones and Jeffrey Lord became locked in a fiery and emotional debate in which each accused the other side's party party of stoking racial tensions.

The extended debate, which was both passionate and personal, served as a microcosm of the national discussion over racial divisiveness and the increasingly negative tone of the presidential campaign.

"There's a lot of blame to go around for the tone of this campaign," David Axelrod, the chief strategist on Barack Obama's presidential campaigns, said when their intense but respectful on-air faceoff was over. "You're seeing a preview of it here."

"The things that Donald Trump has done, and not just in this race, are horribly offensive," Jones, a Democrat, said to Lord. "There is a dark underside here...he is whipping up and tapping into and pushing buttons that are very, very frightening to me and to a lot of people."

"You need to take a serious look at the fact that this man is playing fast and loose. When he talks about terrorism, he gets passionate, he says, 'No, this is wrong,'" Jones continued, at one point putting his hand on Lord's shoulder as he was talking, their faces inches apart. "When he talks about the Klan, [he says] 'Oh, I don't know, I don't know.' That's wrong!"

As the other CNN commentators on the set remained silent, Lord, a Trump supporter, responded by accusing Jones and liberals of trying to divide the nation up into racial groups. "This whole attitude of dividing by race is still here, and this is how Democrats do the deal," Lord said.

While respectful throughout, the two men pointed fingers at each other and spoke with passion, almost as if they were two friends having a heated argument alone at the kitchen table.

Jones criticized what he described as "the circus wing" of the Republican party for degrading the tone of the national debate to a point where even his children couldn't watch.

"I have a kid, seven years old, he can't even watch TV. I used to say, 'I don't want you watching the Kardashians, I want you watching the news so you can learn something,'" Jones told Lord. "Watching all this nonsense in your party, he turns around and says, 'Dad you're a liar.' He doesn't even know what the word means. But he sees so much vitriol from your party he brings that into our house."