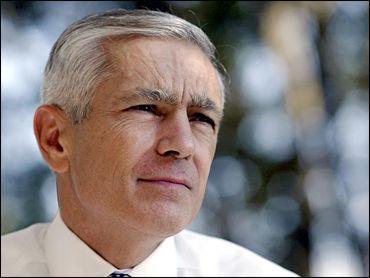 
Wesley Clark, the retired general with a four-star military resume but no political experience, has told supporters he will become the tenth Democrat to enter the presidential race, CBS News has learned.

"He's made his decision and will announce it tomorrow in Little Rock," said Mark Fabiani, a spokesman for Clark. The announcement will be made at 1 p.m. EDT Wednesday, sources said.

Fabiani did not reveal Clark's decision, but officials close to the former general said he told his fledgling campaign team that he's in the race.

A small group of legal, financial and political strategists were invited to a Tuesday meeting in Little Rock after being told Clark was ready to seek the presidency.

One of the invitees, speaking on condition of anonymity, said before the meeting that he was told it was "a 99 percent certainty" that Clark would run, but the retired general wanted to finalize his thinking at Tuesday's session.

A top Democratic organizer "” another veteran of the Clinton-Gore political team "” said he flew to Arkansas for the talks after being told Clark was virtually certain to run. He spoke on condition of anonymity.

Mr. Clinton has urged Clark to run, but associates say he will not take sides in the primary fight.

Clark, 58, believes his four-star military service would counter Mr. Bush's political advantage as a wartime commander in chief, friends say. The retired general has been critical of the Iraq war and Mr. Bush's postwar efforts, positions that would put him alongside announced candidates Howard Dean, Sen. Bob Graham of Florida and Rep. Dennis Kucinich of Ohio as the most vocal anti-war candidates.

It would be a long-shot bid.

Just four months before voting begins, Clark would be competing against candidates who have had months to raise money, build organizations in key states and recruit the party's top political talent.

But the strategists assembled in Little Rock are among the party's best. An Internet-fueled draft-Clark movement has developed the seeds of a campaign organization and more than $1 million in pledges.

Clark's resume is formidable "” Rhodes scholar, first in his 1966 class at West Point, White House fellow, head of the U.S. Southern Command and NATO commander during the 1999 campaign in Kosovo.

Nearly 12 years after Bill Clinton announced his first campaign, Arkansans were excited at the prospect of backing another favorite son.

Jean Wallace, a classmate of Clark's from grammar school, has organized Warriors for Wes, a group of Clark classmates named after the mascot at their alma mater, Hall High School. She said the supporters were ready to travel the country to tout Clark's candidacy the way "Friends of Bill" organizations crisscrossed the country campaigning for Clinton.

"We are eagerly awaiting an announcement very shortly. There are thousands of people across the country doing the same thing, people who have put their hearts and time and resources into this effort," Jeff Dailey, spokesman for Draft Clark for President 2004, said.

The group, one of several Draft Clark groups, boasts of 166 coordinators in 50 states.

There is no passion to be found playing small, in settling for a life
that is less than the one you are capable of living. - Mandela
9/16/0311:47 AM
Original Post