Gerald Massey's comparative list of Kemetic / Egyptian (pre-Christian) religious-philosophical data, Christianized in the Canonical Gospels and the Book of Revelation.

One questions that always arise is: "If Kemet / Egypt was so great what happened?" The question is brief yet the answer takes days, weeks and even years to answer. What happened to Kemet / Egypt was not an overnight event but was a process of destruction resulting from the Aryan (European and Arab) onslaught lasting more than three thousand (3,000 years) - from 1,500 BCE till 1,500 AD. The onslaught continues to this day with a militarily defeated population having to endure invading predators digging over and for remains (read treasures) of the Kemet / Egyptian ancestors. In addition, having to endure identity theft of epic proportions against absurd claims that Kemet civilization was of Aryan (European, Arab [Semitic]) origins. We now have the destroyers claiming to have created the very civilization they have, and continue, to destroy. What a horror story! 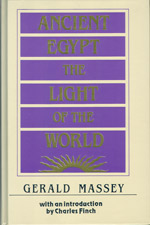 Each succeeding group of invaders, beginning with the Martu (erroneously called Assyrians), appropriated not only the material spoils of Kemet society, but in addition, the intellectual and technological spoils as well. We are talking about barbarian invaders setting themselves up as rulers and forging their domains on the spoils of the invaded. The fabrication of Christianity is one such example of a domain created by barbarian invaders on the spoils and demise of those from whom the foundation of Christianity was taken.

A brief explanation is in order. African civilizations ranging from Kemet / Egypt in North Africa to Chou Civilization in Southern Asia (the area now called China) were invaded by Aryan predators (now called Europeans, Arabs, and Asians) beginning approximately 1,500 BCE (Before Common Era). With each civilization / society that was conquered the invaders used the spoils to fabricate societies of their own; the invaders of China created Jainism and Confucims; those in India created Brahmanism; those in Asia Minor created Zoroastrianism, and Judaism; and those invading Kemet created "Greek Philosophy", Christianity and Islam.

As a part of the process of domination each invading group claimed authorship of the knowledge base and technology they appropriated from their victims. Each one claimed what they fabricated to have no relationship whatsoever with the civilization / society of the invaded population. Christianity is espoused in this fashion.

That Christianity is but stolen Kemetic / Egyptian religious philosophy and spirituality, including its rituals and beliefs, reframed in an Aryan imageis the subject of the following presentation.

The author and scholar Gerald Massey, once a Christian Priest, who began investigating the questions that Christianity's origins posed for him found the trail leading to the civilization of Kemet / Egypt. As a consequence Massey became a student and investigator of Ancient Kemet / Egypt, subsequently revealed his findings in four major publications - Books of the Beginnings, (2 vols.), The Natural Genesis(2 vols.), Ancient Egypt the Light of the World (2 vols.) and The Lectures (1 vol.).

Massey over the course of twenty or so years presented facts proving Christianity was fabricated upon what was stolen from Kemet / Egypt; and that Christianity was in no respect original or from any god. The following excerpt from the appendix of Ancient Egypt the Light of the World is of the comparative list Massey compiled demonstrating that Christianity is a plagiarized fabrication from its Kemetic / Egyptian origins. The list is eight pages in length; however we are presenting only three of the eight pages. Hopefully you will acquire the publications of Gerald Massey and learn the truth about Kemet / Egypt and its impact on the fabrication of Christianity for yourself. Following the list is a short bibliography from which you can get more information.